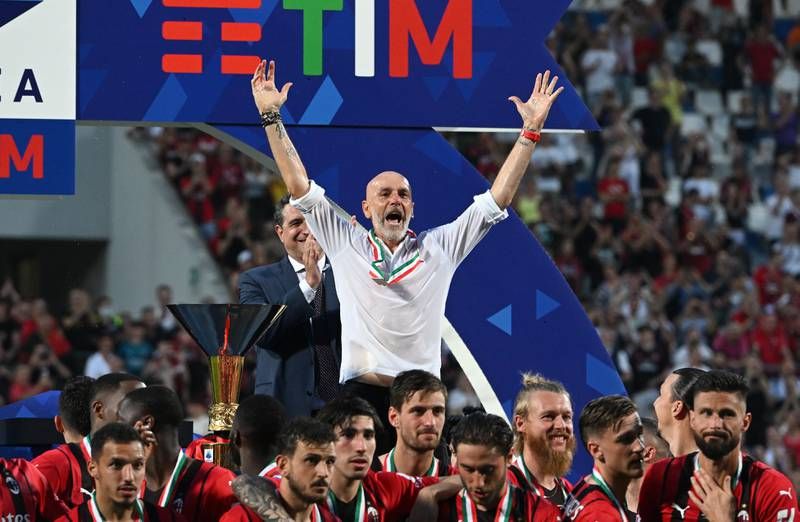 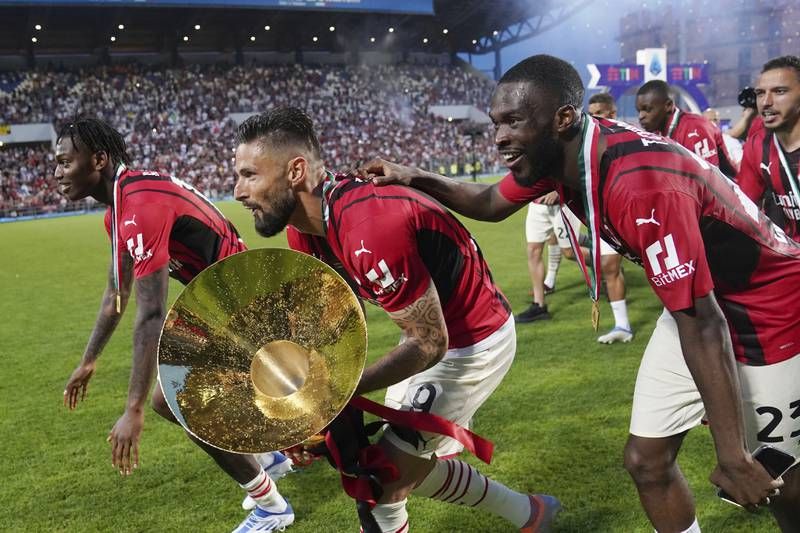 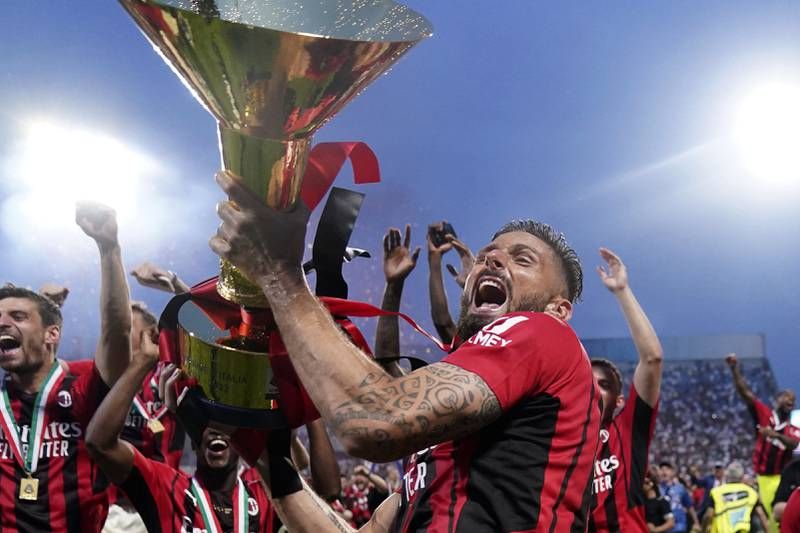 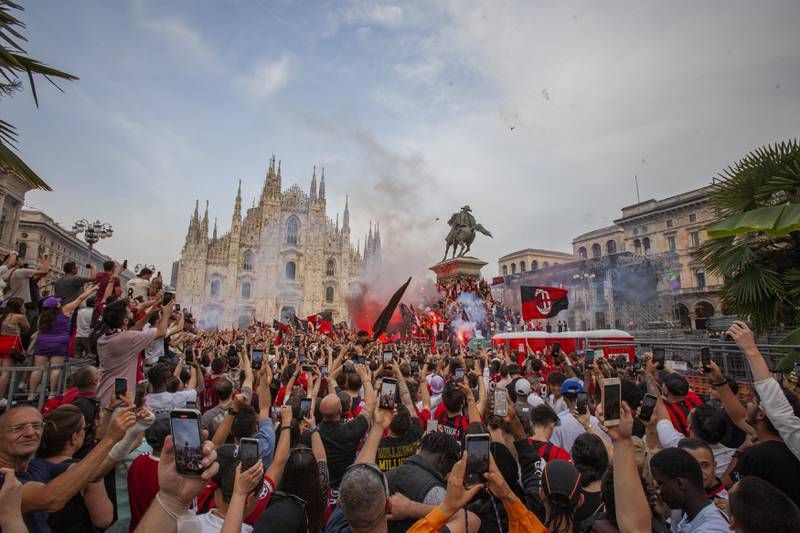 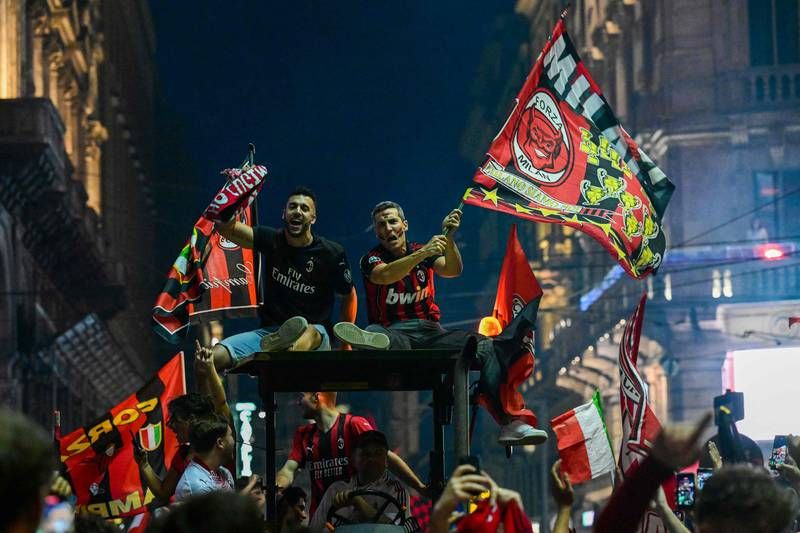 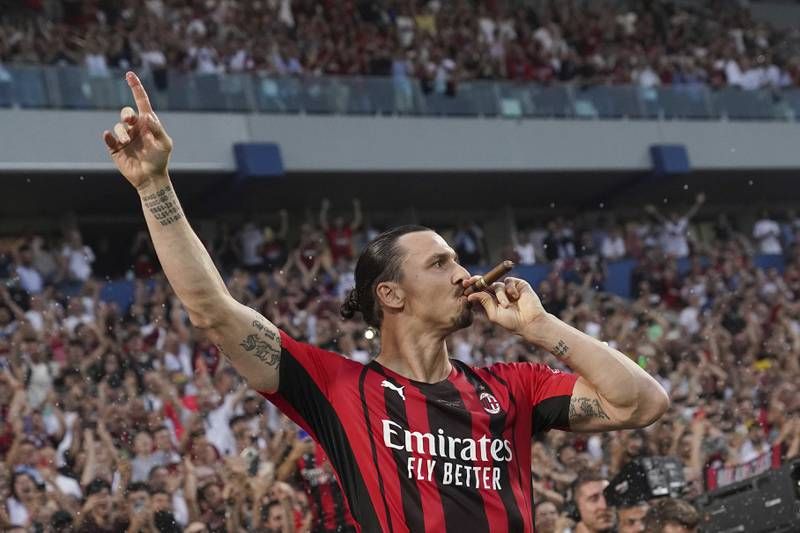 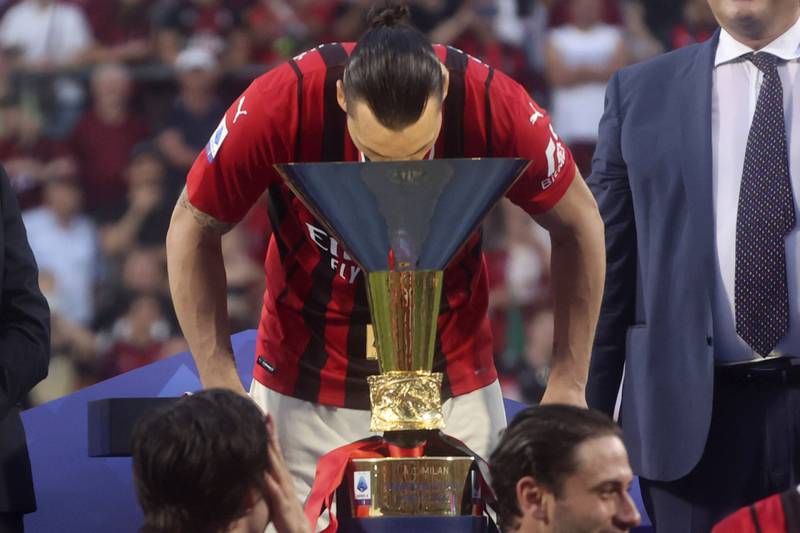 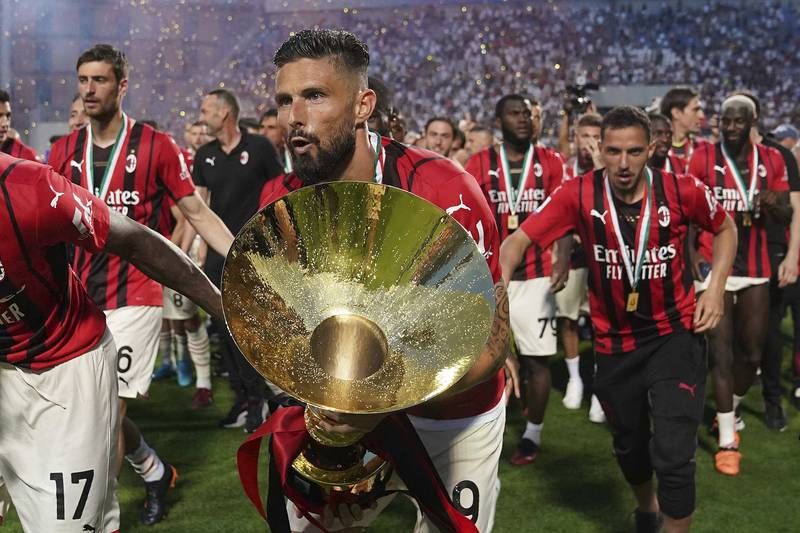 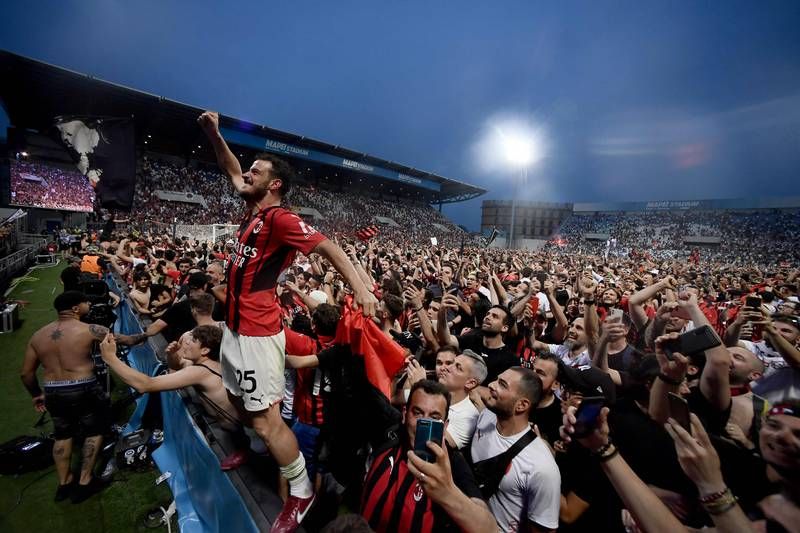 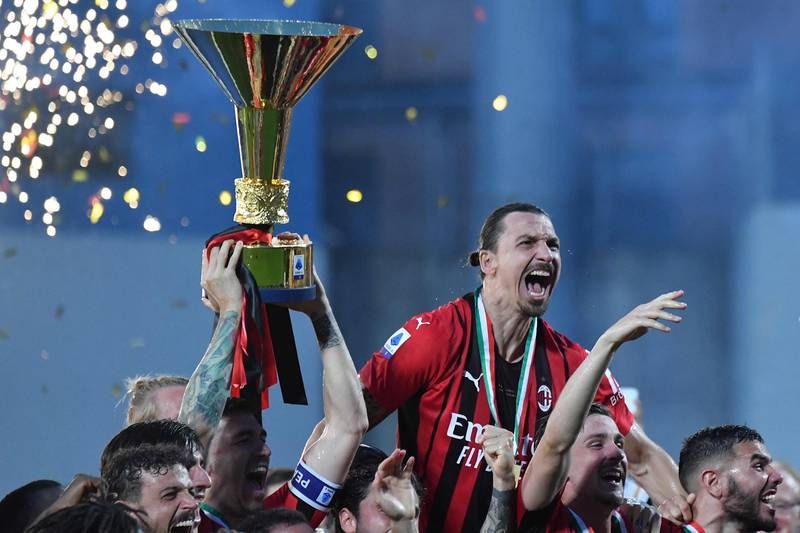 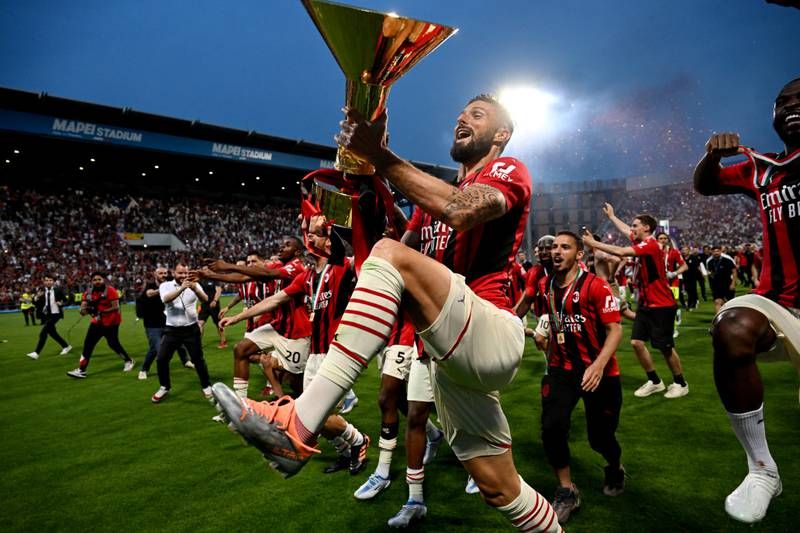 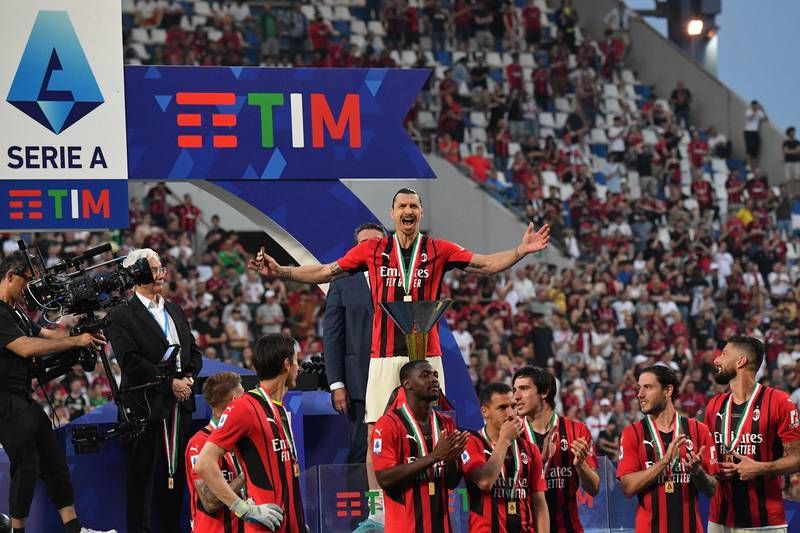 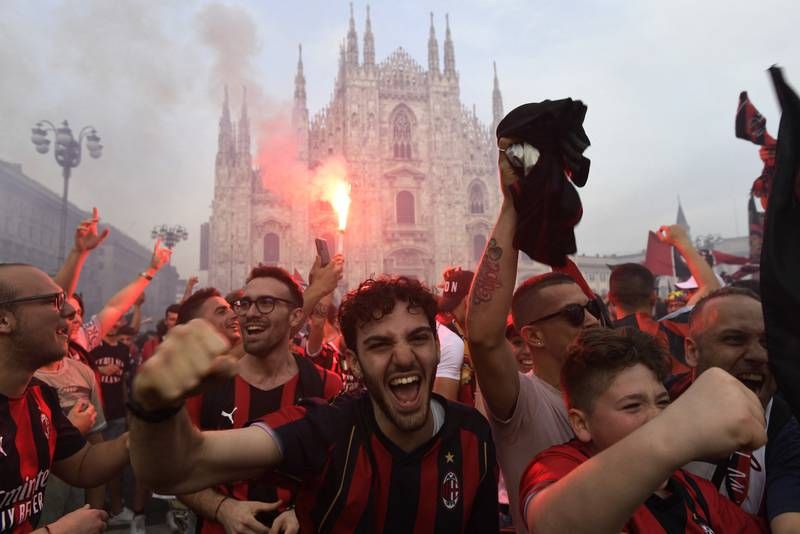 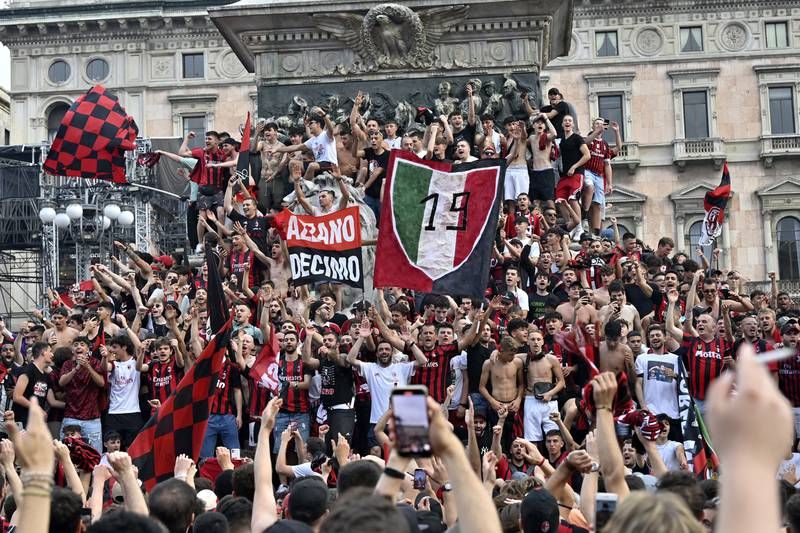 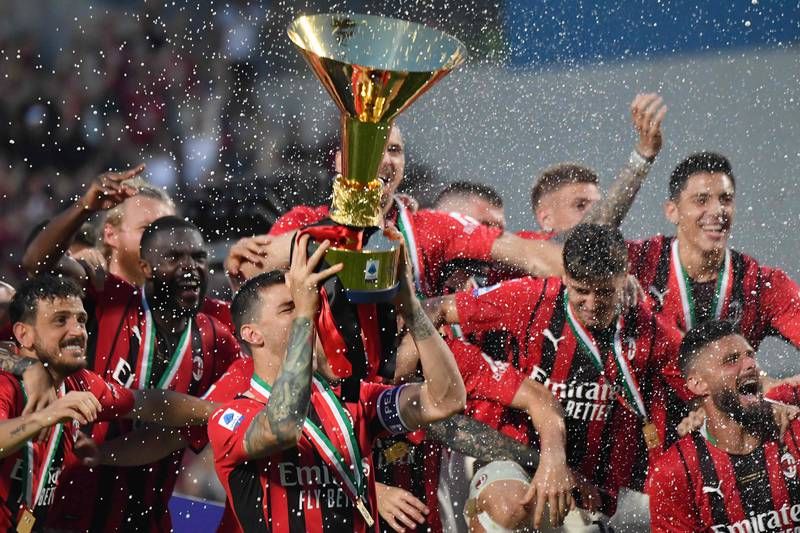 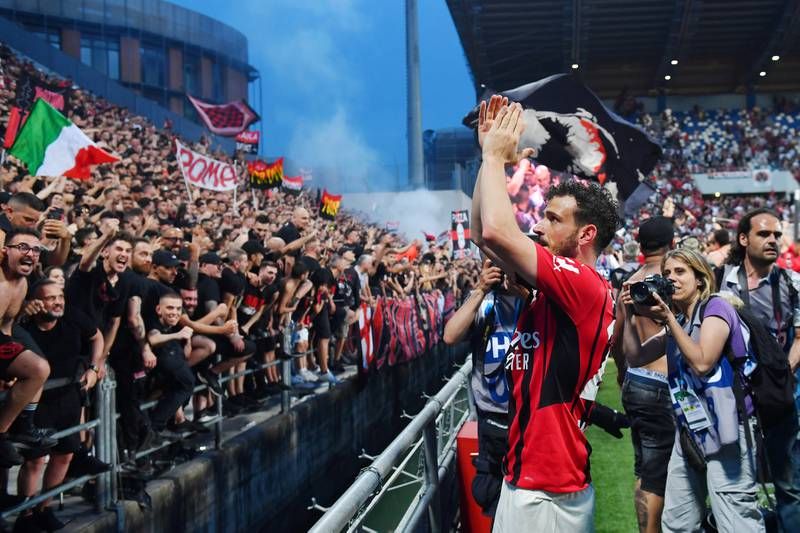 AC Milan manager Stefano Pioli and his players celebrate after winning the Serie A title. Getty

AC Milan manager Stefano Pioli has told his players to enjoy their Serie A title success before challenging them to get ready to compete with the best teams in Europe next season.

Milan ended an 11-year wait for the scudetto on Sunday after beating Sassuolo 3-0. A double from Olivier Giroud and a Franck Kessie strike earned the Rossoneri a final-day victory to take the trophy ahead of Inter Milan, who beat Sampdoria 3-0 at the San Siro to finish two points behind their rivals. 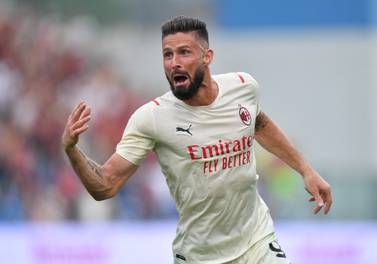 Pioli celebrated with his players and thousands of fans who had made the journey to Emilia-Romagna for the historic day, before looking ahead.

“We are Milan, we are back to being Italian champions, we will be in the first tier in the Champions League next year,” Pioli said.

“Let’s enjoy this victory because it is right for everyone to enjoy it, then afterwards we have many ambitions to compare ourselves with the best in Europe.

“We have won a difficult championship against strong opponents and I believe that the value of the victory must be strengthened by having overtaken strong teams like Inter and Napoli, and Juventus. Over time we too have become strong.”

Pioli praised the club’s hierarchy for their role in the title win, and for the faith they had shown in him to see through his project.

“The directors have created a winning mix of young and experienced players and we’ve built a winning mentality,” he said. 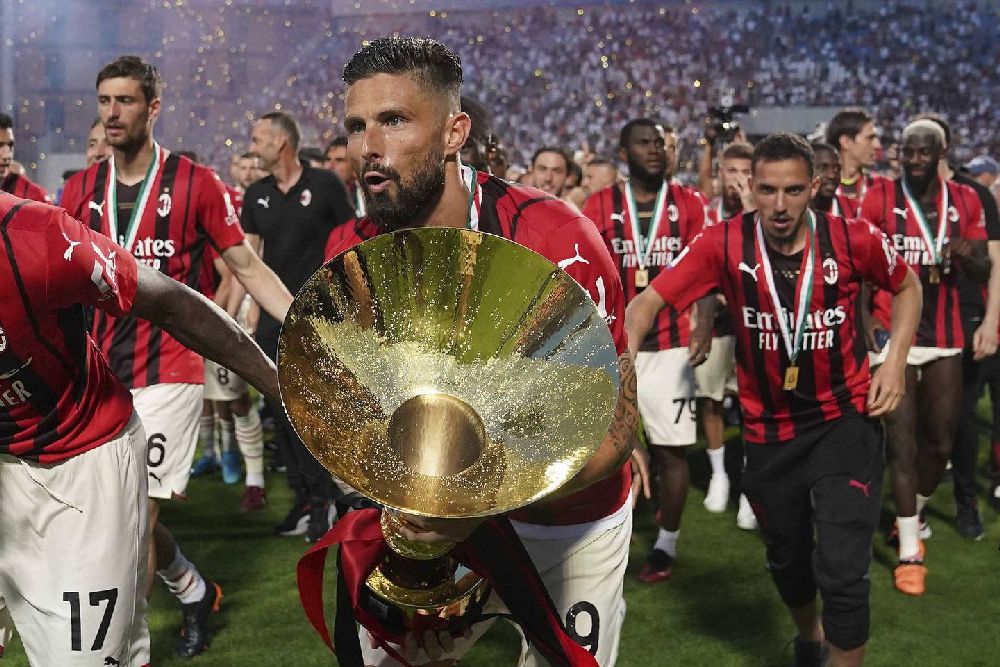 Olivier Giroud celebrates with the Serie A trophy after scoring twice in the 3-0 win over Sassuolo. AP

“My idea is to improve the players I have, but it’s all the more difficult without talent. The club’s ability to sign talented players brought results. Congratulations to everyone.”

Milan’s resurgence can be traced back to the return of Zlatan Ibrahimovic, who began his second spell at the club in January 2020 and had a transformative impact on the club’s on-pitch fortunes. After winning the 12th league title of his career, the Swedish striker said this year’s success meant more than the rest.

“This is the most satisfying of my titles,” said Ibrahimovic, who also helped Milan to the last of its Serie A titles in his first spell at the club. “I still remember when I came back I promised to take Milan back to the top and to win the scudetto. Many didn’t believe and laughed. Instead I am here as a champion now. 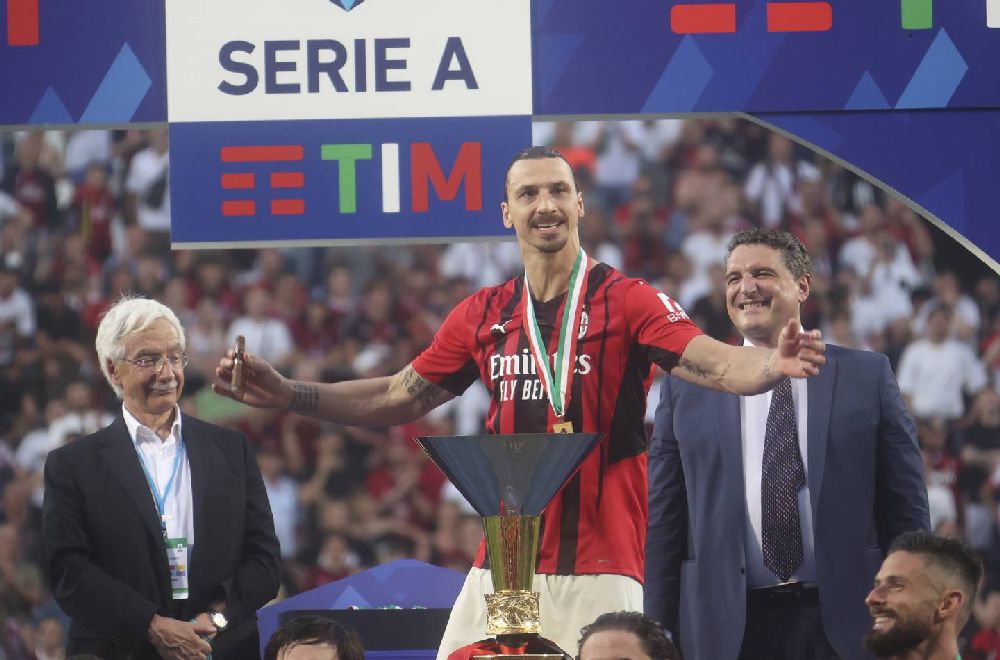 Zlatan Ibrahimovic celebrate with the Serie A trophy and a cigar. AP

“We worked hard, made sacrifices, suffered. And when you can do that, everything is possible. I suffered a lot for this trophy. It’s the most satisfying.”

Ibrahimovic’s contract expires at the end of next month and having missed large parts of the season with injury, his future remains up in the air. However, the 40-year-old forward has suggested he would like to extend his stay at the club.

“First I have to do things to feel good,” he said when asked about his future. “If I manage to remain well then it hasn’t been my last match. We’ll see what happens.”