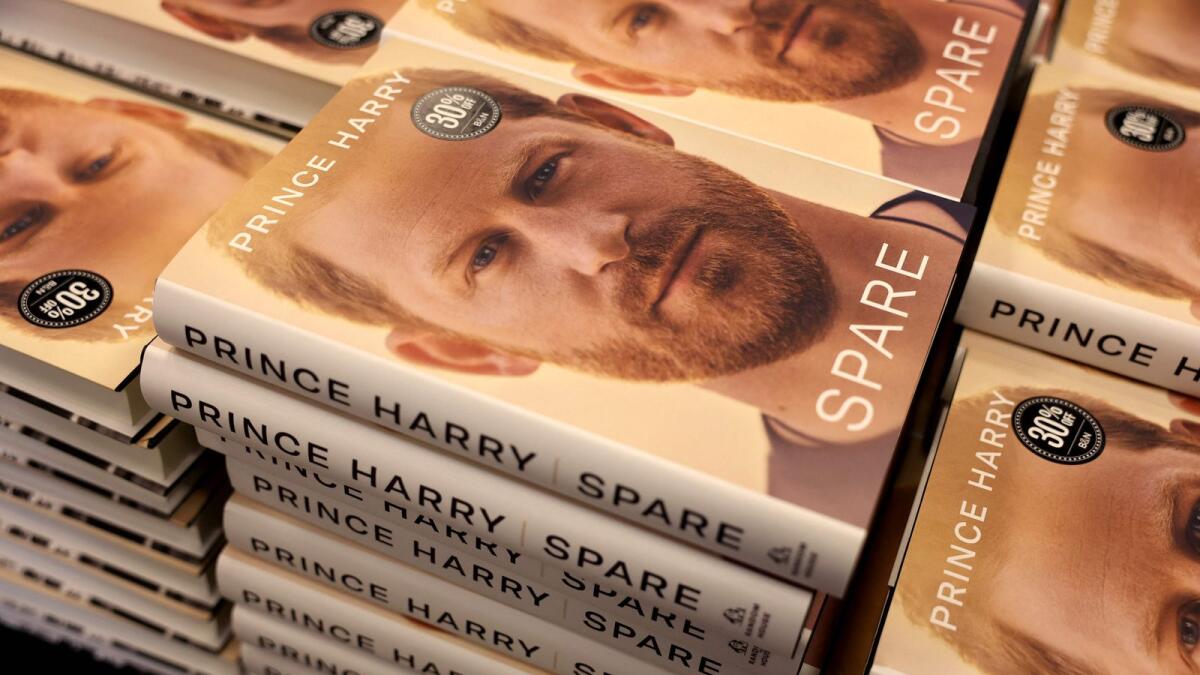 Prince Harry’s memoir sold a “record” 1.4 million copies in just 24 hours, its publisher said on Thursday, as his father and brother kept calm and carried on with public visits.

The figures come as the first opinion poll since publication showed Harry’s popularity in the UK continuing to nosedive.

The headline-grabbing book was published Tuesday accompanied by a high-profile string of promotional interviews.

The former US president’s memoir sold 887,000 English-language copies in the United States and Canada on its first day with his wife’s book selling 725,000.

In France, the French edition of “Spare” launched with a print run of 210,000 and is being reprinted with an additional 130,000 copies, publisher Fayard told AFP.

Demand from booksellers was about 20 per cent higher than for Obama’s presidential memoirs, it added.

As the publishers in New York hailed the success of “Spare”, the royal family – whose “never complain, never explain” motto has been criticised by Harry – put on a united front back home.

Maintaining their silence on the subject, heir to the throne Prince William visited a hospital in Liverpool with his wife Catherine, while his and Harry’s father King Charles III visited a community centre in Scotland.

In Liverpool, there was a mixed reaction among those who turned out to see William and Catherine.

One 81-year-old woman named Sylvia grasped the future king’s hand, telling him “Keep going, Will, Scousers (people in Liverpool) love you”, to which he replied: “I will do”.

“I think that every family has its problems and obviously they (Harry and his wife Meghan Markle) feel the need to put that out into the world,” hospital worker Shannon Simons, 28, told AFP.

She added that the book seemed “money-grabbing”.

However, another staff member, Stacey Oats, 35, said she was not a fan of the “outdated, royal family” and saw Harry and Meghan as “more normal”.

Parts of the Harry’s autobiography were widely leaked but its contents have continued to fill airtime and newspaper and online pages.

Revelations included a claim that William physically attacked Harry in an altercation in 2019 and how the once-close brothers begged their father not to marry Queen Consort Camilla.

The 38-year-old former soldier also said he had killed 25 Taliban during his time in Afghanistan, sparking condemnation from military personnel and the Taliban.

Gina Centrello, president and publisher of the Random House Group, said in a statement that “Spare” was far more than a celebrity memoir.

“Vulnerable and heartfelt, brave and intimate, ‘Spare’ is the story of someone we may have thought we already knew, but now we can truly come to understand Prince Harry through his own words,” she said.

The book is one of a number of lucrative contracts struck by Harry and his American wife, cashing in on their royal connections.

The couple dramatically quit royal life and moved to California in 2020 and have complained bitterly about their treatment in the UK.

A YouGov survey published in The Times newspaper found only 24 percent of people now have a positive view of the prince — down from 80 percent a decade ago — with 68 percent critical.

Among over-65s, Harry and Meghan’s popularity ratings were even worse than those of the disgraced Prince Andrew, the survey found.

The first US printing of “Spare” was two million copies, however the book has now gone back to press for additional copies to meet demand, according to Penguin Random House.

The publication comes as the royal family prepares for Charles’s coronation on May 6.