Let’s do something different…

Despite the fact it’s been open since February of this year and that it’s co-helmed by one of the UAE’s best know Emirati chefs, Faisal Alharmoodi — there’s a fair chance you won’t have heard about Let’s. It’s been busy, often booked out in fact — purely on word of mouth of it being one of Khalifa City’s best polished hidden gems.

And it’s because of this whispered reputation along with the allure of a menu that lines up all-day breakfast dishes back-to-back with innovative Emirati fusion concepts — that my internal curiosity gauge was pushed over the line from ‘you have my attention’ to ‘this sounds like a job for me’.

I’m here for a matinee seating, and the creative use of car park space is the first visual cue of just how popular this place is. Inside, spare tables are equally precious real estate, wait staff slip between them, gliding across the immaculate slate flooring. There are earthy terracotta tones to the banquets, off-white textured walls with back lit art and muted green olive trees that draw an idlling gaze.

Chef Faisal is here to greet me, he tells me that the materials he has used to create this organic modern Mediterranean aesthetic — have been imported directly from the source. And it seems immediately apparent that this attention to detail, and a well-travelled eye for style both on and off the plate have been vital components in the success of his significant contributions to the Abu Dhabi cuisine scene.

I’m kicking off the taste adventures with a light trek through one of Let’s’ best-loved breakfast dishes. The burrata zaatar flatbread (Dhs50) sits somewhere between a manakish and a pizza — and it feels like a natural crossover. Carved into four slices, the fire-baked base gives the whole dish a smokey rustic profile, turning up the contrast on the creaminess of cheese and floral notes of zaatar. 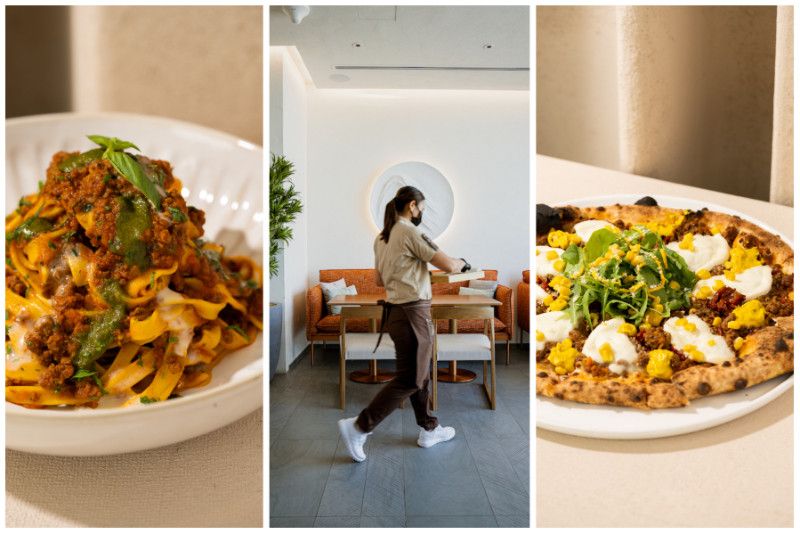 It’s followed by a burrata fatush (Dhs65) and arancini balls (Dhs55). ‘Lightness’ and ‘capacity to refresh’ are amongst the most attractive qualities in any hypothetical salad. They’re both native to this fusion fatush, you’ll also find a feisty interplay of citrus, satisfying khubzy crunch, nourishing garden greens, house pickled onion, and a DM slide of sweet pomegranate. The arancini balls are cleverly conceived. They come with a mushroom-truffle-mozzarella core, subtle in flavour but enhanced by folding the pomodoro-style sauce onto each forkful.

For the main course, I’ve got a pair of off-piste arborio rice dishes — a chicken saloona risotto (Dhs75) and a spicy shrimp risotto (Dhs80). Of the two, it’s the former that strikes the most harmonious chord, a true Emirati x Italia collab going in hard on the reimagining of a traditional saloona stew. It takes a few mouthfuls of recalibration to fully appreciate the resultant flavour waves from the collision of these culinary worlds. The parmesan lends depth to spice-emboldened stock, an ocean of umami beneath rugged islands of spice souk chicken.

Verdict: A little ‘habibi’, a little ‘amici’, Let’s is a lot like something we’d like to see more of, and we haven’t even touched the pastry, one of its most prized exports.