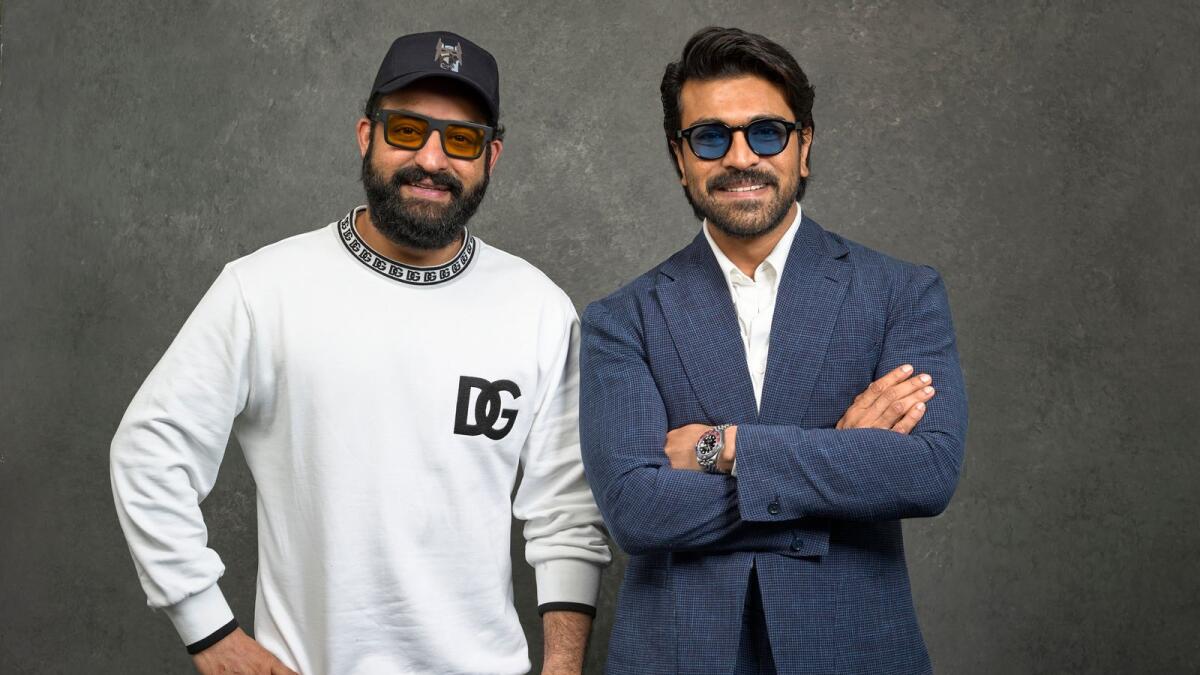 Hollywood’s awards season has found an unlikely underdog in RRR.

S.S. Rajamouli’s three-hour maximalist action epic is one of India’s most expensive and top-grossing films of all time. It pairs two of the country’s biggest stars, Jr NTR and Ram Charan, and topped Netflix streaming charts over the summer.

It’s been showered with praise from the likes of J.J. Abrams and Jessica Chastain. It won best original song at the Golden Globes for the exuberant Naatu Naatu and just picked up two Critics Choice Awards for Best Foreign Language Film and Best Song (Naatu Naatu).

But the Academy Awards generally shun foreign films and over-the-top action movies in key categories. And RRR can’t win the international feature film Oscar because India submitted Pan Nalin’s much quieter Chhello Show instead. A nomination for best picture at the Oscars remains a long shot.

To give their film a final push, Jr NTR and Charan traveled to Los Angeles to walk the Globes grey carpet, mingle with the likes of Cate Blanchett at parties, and attend packed screenings for potential awards voters, including one at the TCL Chinese Theatre in Hollywood that featured a riotous dance party during the Naatu Naatu scene.

They sat down for a joint interview to talk about their real-life bond, Rajamouli’s discussions of a sequel, and building bridges between the world’s film industries.

The movie was a big success when it opened in India but it’s been a slow burn in terms of Western audiences catching on through word-of-mouth and watching it on Netflix. How have you experienced that?

Jr NTR: You really don’t get to know what’s actually happening in the audience’s mind when people are watching movies on Netflix. But our breakthrough was when we saw Mr. Rajamouli have a screening at the TCL (in September). And the response — he got a standing ovation. I think that was the opening for how we started knowing that the West has taken RRR into their hearts. And I wish we both were there. But I think that was our first breakthrough — and the social media.

Charan: It’s so satisfying to see every reaction. Everything we performed for has been appreciated. And the reactions were just priceless. Yeah, it was like a slow burn. But nevertheless, this is like another feather in the hat for us.

Ram Charan, you were in production during at least part of that time on your next movie. How were you sort of staying in touch with your RRR brothers?

Charan: The RRR journey started in 2018, and this is 2023 now, and we are still in touch. I think we just took a consensual break that we needed time away from each other because we were so into each other. 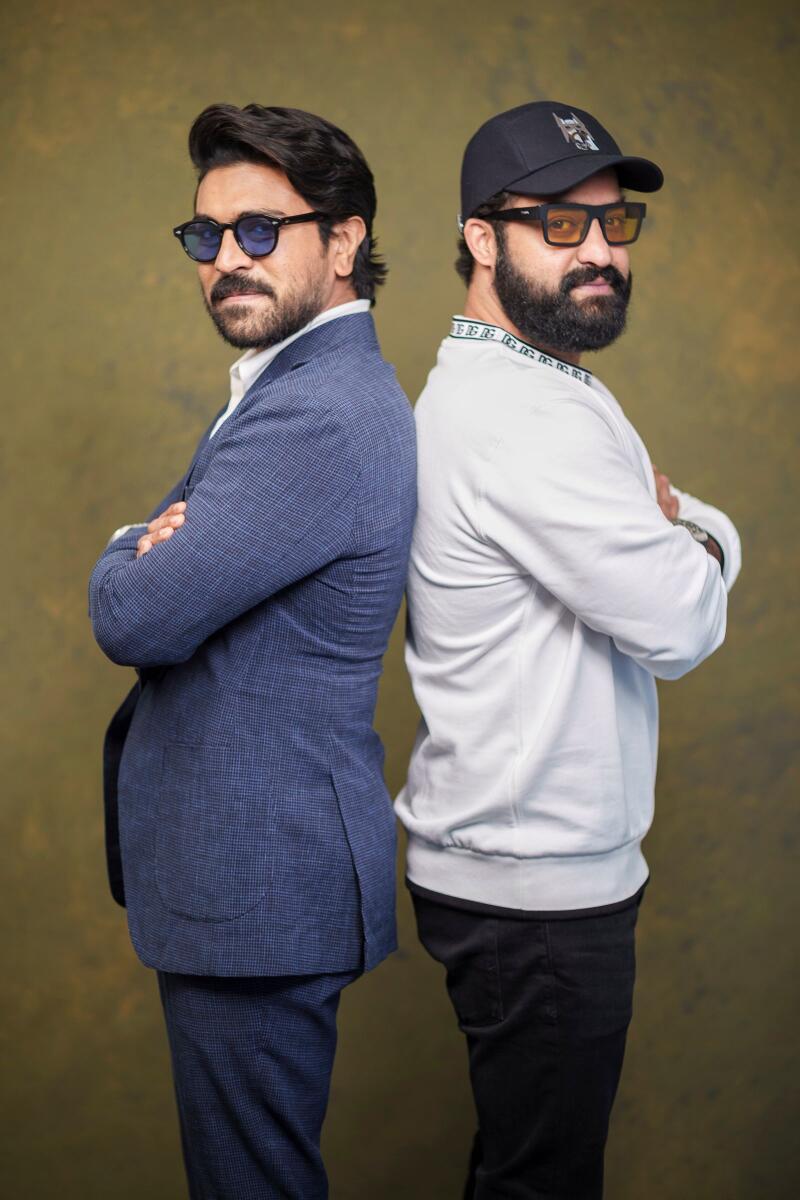 Rajamouli’s talking about a sequel, but you guys are both probably booked up?

Charan: No. We’d clear the calendar.

Jr NTR: We’ll clear the calendar. But unfortunately we have no idea about it. We have no clue about RRR 2 until he spoke about it. So if you interview him, you should actually get the clarity from him so that we know when it’s starting, so that we can keep our calendar free.

Was it something that had been discussed when the movie wrapped?

Charan: No. Nothing. We heard it for the first time when he was talking to you guys. I mean, we’re not kidding on this. We never spoke about it.

Jr NTR: And he never tells us anything.

Charan: Yeah, everything is a surprise.

Jr NTR: I would say it’s a bad thing. I hate surprises. Maybe Charan likes them.

Charan: He knows we clear the calendars whenever he calls us. He takes us for granted on that. (Laughs)

The political message of the film and the timing of its release, how important is that to you?

Charan: I personally feel it was more about the brotherhood than the nationalism or the patriotism in the film. It was in the background. Obviously, it’s the era that we have selected, the director has chosen had the sense of nationalism running under the water, like under the carpet. But what you actually see is a full-fledged fictional story.

Charan: Bromance derived from two historic characters, legends. But end of the day, we’re not playing part of the history. It is Mr. Rajamouli’s interpretation and his fictional thoughts and writing with his father.

Jr NTR: Rajamouli as such, I really don’t think he makes movies because he wants to send out a message. For him, it’s just storytelling and it’s about making entertainment … To tell this story, he’s picked up a time frame where India was being ruled by the British Empire. Yeah, simple. So other than that, there was no message to it. But yes, it was more about two friends — their egos, their understanding of the world, each other, how they grew together, how they were apart, how they came together. How they went off, separated, and how they got back together and grew strength individually in their lives.

And how much does that sort of “get together, push apart, come back together,” mirror your own real-life relationship between the two of you?

Charan: Yeah, but we never had such bad misunderstanding and separation where we were fighting. But yeah, we are very close. The characters we played have been very close. On all the good, good parts of the movie, it’s pretty much what we also share in real life.

What are the goals in terms of being in Hollywood? Do you want to star in, say, a Quentin Tarantino movie?

Charan: Absolutely. I mean, it’s always there. Like I said, it was not part of our goal to come to LA, but we landed up here. So we are taking it as it goes. And of course, we want to experience the great directors of LA and Hollywood, and I want them to also experience us as actors and share some cultural ideas and stories between the East and the West. I would love to explore it, of course. And (Tarantino) is one of my favourite directors.

Jr NTR: We come from families which have been into the business for a very long time, but both of us, our entry into films was never planned. It was just very accidental. And accidentally, we are here today, talking about films in L.A. So, yeah, we are actors who I think with RRR we have crossed the boundaries of those imaginary lines of Eastern film industry, Western film industry.

I think we’ve somewhat erased that. And it’s a big good crossover. There’s so much talent here. There’s so much talent there. I think everybody should come together. Avatar 2 is doing phenomenal numbers down in India. So did so did the Avengers: Endgame. So I think it’s high time we all have to collaborate and start making films for the global audiences.

Charan: We are waiting for the day when all the “woods” get burned and there’s one global cinema.

Was it weird that the way that most viewers experienced the film through the Hindi version on Netflix?

Charan: But fortunately, we dubbed all the languages. It was actually us.

Jr NTR: So Hindi, Telugu, Tamil, Kannada, Malayalam, whatever — it was our voice. So we were happy that. But yes, I would say maybe it should have been out in Telugu as well. That’s now, that’s me being, being very, very, very emotional about being a Telugu person. But other than that, RRR resembles India and whatever language it is, I’m happy that it’s reached out to the audiences.

What have your family members said about this weird journey that you’re on with RRR?

Charan: I think they are more happy than us.

Jr NTR: I wish my grandfather was alive to see this happen. Of course he’s not there anymore. But the family has been very supportive, excited. Everybody’s excited. Who wouldn’t be?