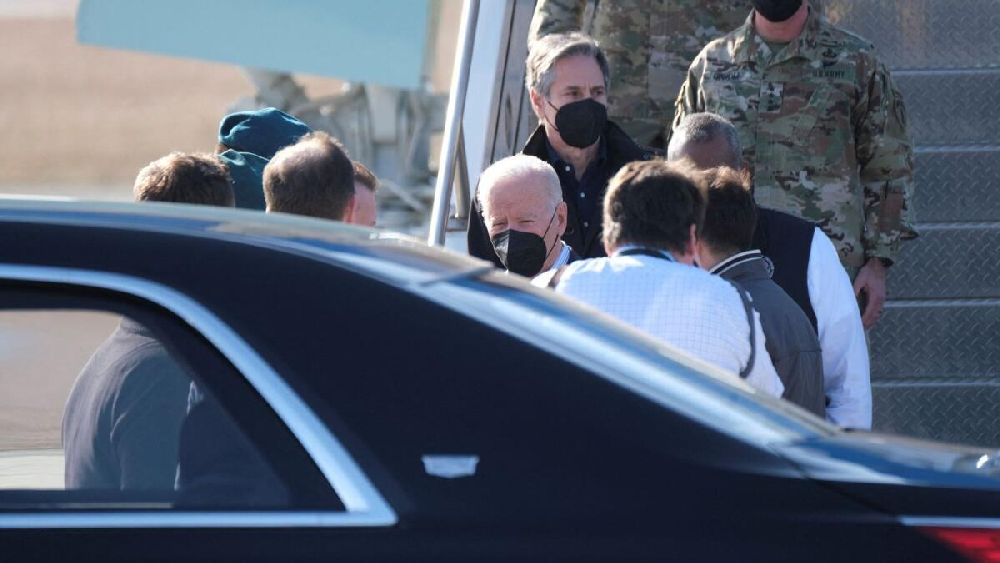 US President Joe Biden came up-close to the war in Ukraine Friday as Russia appeared to row back on its vaulting ambitions, after a month of dogged resistance by Ukrainian forces backed by ever-rising Western support.

Biden visited Poland after forging a new set of measures with the EU designed to lessen Europe’s dependence on energy imports from Russia’s sanctions-hit economy.

His visit near the border came as a clearer scale of the ruin emerged from Ukraine’s besieged port city of Mariupol.

Authorities fear some 300 civilians may have died in a Russian air strike on a theatre-turned-bomb shelter in Mariupol last week, in what would be the attack’s single bloodiest attack.

“I have escaped, but I have lost all my family. I have lost my house. I am desperate,” Oksana Vynokurova, 33, told AFP after finally escaping Mariupol by train to the western city of Lviv.

“My mum is dead. I left my mother in the yard like a dog, because everybody’s shooting,” she said.

Also disembarking from the train, Svetlana Kuznetsova said: “There is no water, light and electricity. We were living in cellars. We were cooking food on fires.

“I have never seen such horror. There is no Mariupol,” the middle-aged woman added. “Mariupol is like Grozny (in Chechnya). Everything is destroyed.”

Giving only its second death toll of the war, the Russian army said it had suffered 1,351 fatalities in the invasion. Ukraine and Western intelligence say it is many thousands more.

In a potentially significant shift, the Russian army said the first phase of its campaign was over and its troops would now focus on the “liberation” of the Russian-speaking Donbas region in Ukraine’s east.

Sergei Rudskoi, chief of the Main Operational Directorate of the General Staff of Russia’s armed forces, said the shift was possible because “the combat potential of Ukraine’s armed forces has been significantly reduced”.

Ukraine’s Foreign Minister Dmytro Kuleba, however, indicated no let-up in his country’s refusal to accede to Russian demands after what he termed “very difficult” talks with Moscow.

“We insist, first of all, on a ceasefire, security guarantees, and territorial integrity of Ukraine,” he said.

And while Mariupol and other places are now charred ruins, Western systems including shoulder-fired anti-tank missiles have helped Ukraine’s armed forces hold their line — and increasingly to go on the offensive.

“Ukrainian counter-attacks, and Russian forces falling back on overextended supply lines, has allowed Ukraine to re-occupy towns and defensive positions up to 35 kilometres (22 miles) east of Kyiv,” Britain’s defence ministry said in a daily update.

After summits of NATO, the European Union and G7 in Brussels, Biden warned that the NATO alliance would “respond” if Russian President Vladimir Putin resorts next to chemical weapons.

En route to Poland, National Security Adviser Jake Sullivan said Russia would pay a “severe price” — but stressed “the United States has no intention of using chemical weapons, period, under any circumstance”.

Biden and EU commission chief Ursula von der Leyen announced a joint energy task force in Brussels, before he headed to the eastern Polish town of Rzeszow, a mere 80 kilometres (50 miles) from Ukraine.

For his part, Putin accused the West of discriminating against Russian culture, likening it to the ceremonial burning of books by Nazi supporters in the 1930s.

“Today they are trying to cancel a thousand-year-old country – I am talking about the progressive discrimination against everything connected with Russia,” he said in televised remarks.