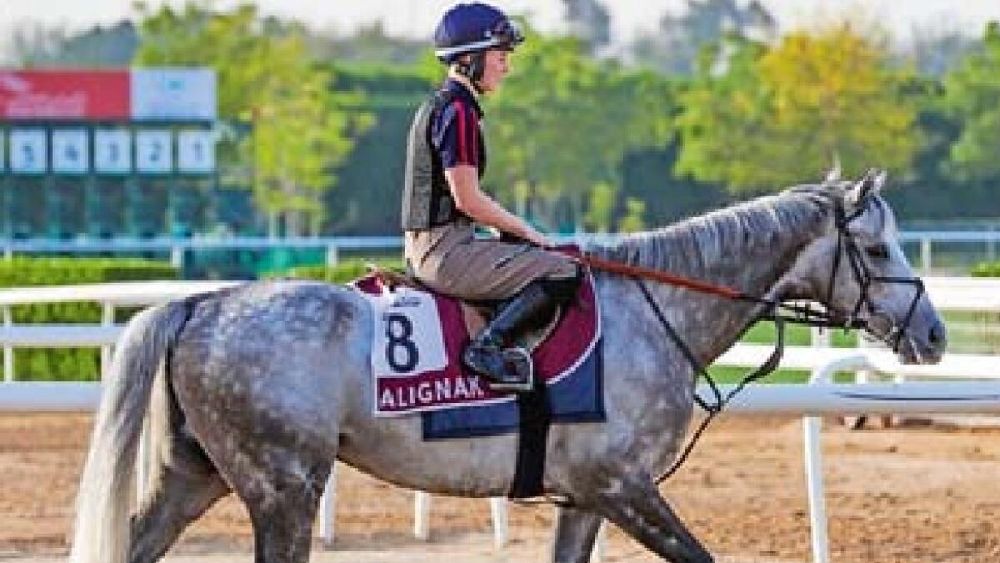 Jockey Saffie Osborne feels that the return to two miles will suit the consistent Alignak, as she gears up for her first ever ride on the Dubai World Cup card at Meydan on Saturday in the $1million Group 2 Dubai Gold Cup.

Trained by the jockey’s father, Jamie Osborne, the six-year-old has been in fine heart in the UAE over the winter, hitting the frame on each of his four starts under Osborne.

Alignak has raced over two miles once before, finishing third over an extended trip in a warm conditions event at Newcastle last December, and his jockey feels that the extra couple of furlongs ought to suit him in this Group 2 contest.

She said: “This will be Alignak’s first try over two miles over here and I think he’ll run a big race as the trip should really suit him.

“He’s been quite noticeably slow away in his races and he’s got a habit of leaning to one side in the stalls so this morning we tried putting a rug on him in the stalls. He was breaking very well and very straight and hopefully from stall two I can jump a bit better and get a position in the middle of the field rather than at the back.”

Osborne continued: “He’s been running against top-class horses and he’s had a field to pass every time he’s run, so I think he’s shown that he needs this trip and obviously this is his first opportunity to get it. This is a top-class field, with the likes of Stay Foolish and Manobo in there, but I think he will run a big race.”

Osborne has spent a large chunk of the winter riding in the Middle East, picking up opportunities in both Bahrain and the UAE – something which she revealed she has thoroughly enjoyed.

She said: “It’s been amazing being over here this winter and I’m so grateful to have had the opportunity to be able to do that. You need to thank Jimmy McCarthy (assistant trainer) far more though for the training of the horse and why he’s been running so well!

“It’s amazing to be here, I grew up watching Toast Of New York run here [winning the 2014 UAE Derby] when I was turning 12 or 13. To think a few years later I’m here riding myself is crazy and I’m just really grateful to Mr Tufft and my dad for giving me the opportunity to do this on a horse with a live chance of being in the picture.”