With a street value of Dh135.4 million, the narcotics were confiscated in a series of operations 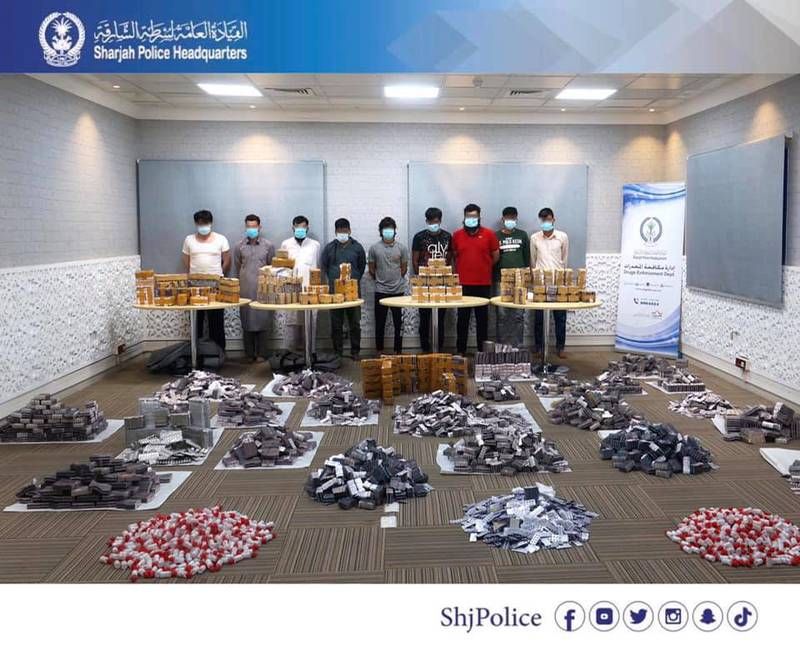 Nine men with about one million Xanax pills were arrested in a police operation in Sharjah last year. Photo: Sharjah Police

The force’s end-of-year report showed that it confiscated 822kg of crystal meth, 251kg of heroin, 94kg of hashish and more than 3.4 million tablets of different types.

These included Operation Rasid in May when officers seized 115kg of drugs, and Operation Poisoned Rope in June when 215kg of crystal meth and heroin were confiscated from a dhow at Port Khalid in the emirate.

“The fight will continue, everyone in the force is doing their best, which is evident by the decline in serious crime rate by 7.6 per cent,” said Maj Gen Shamsi.

“The rate for solving crimes that were registered against unidentified offenders went up by 21 per cent last year.”

Stepping up efforts to maintain security in the emirate, Sharjah Police have been investing in the latest technology, identifying crime-prone areas and launching projects to keep the streets safer.

Sharjah Police and Sharjah Police Academy, in partnership with a number of universities, will soon launch the ‘Ready for the Future’ award.

Participants who submit ideas and projects that can help to fight crime will win $54,000 in prizes. No further details were made available.