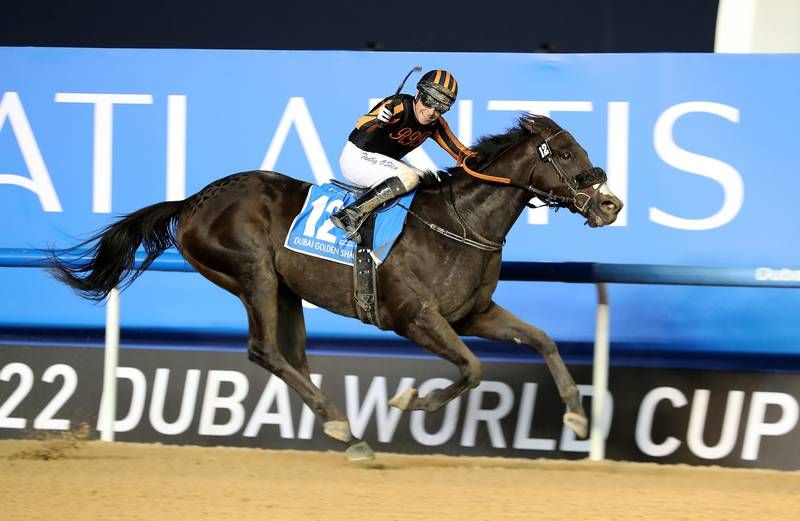 Tadhg O’Shea after guiding Switzerland to the Dubai Golden Shaheen during the Dubai World Cup at Meydan Racecourse. Pawan Singh / The National

The penultimate fixture of the season and final meeting in Abu Dhabi on Thursday should see the UAE jockeys’ and trainers’ championship titles decided.

Tadhg O’Shea is eight winners ahead of Antonio Fresu as he bids for a 10th jockeys’ title while Bhupat Seemar is also eight clear of Doug Watson and Ernst Oertel in the race for the trainers’ championship.

O’Shea and Fresu are booked to ride in all 13 races across two days, concluding with the season’s final meeting in Al Ain on Friday. 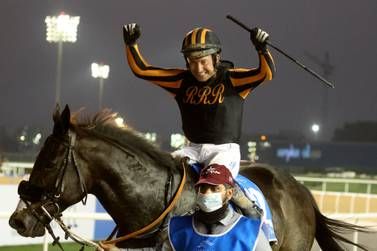 However, Seemar has only one thoroughbred race in Abu Dhabi against Oertel’s 10 entries across the two days.

The highlight in Abu Dhabi’s six-race card is the Group 3 Arabian Triple Crown Round-3, the third and final round of the series for four-year-olds run over the 2,400-metre distance.

Helal Al Alawi is double handed with Izadi Star, who made a winning local debut in the Group 3 Arabian Triple Crown Round-2, and the runner-up Kalifano De Ghazal.

Third and fourth in that race for trainer Ibrahim Al Hadhrami is Sattam Muscat, the mount of Fresu, and Bahar Muscat. O’Shea is on board the UAE Arabian Derby runner up AF Mualami.

O’Shea is also the retained jockey for the UAE owners champion elect Khalid Khalifa Al Naboodah whose horses are trained by Oertel.

“Regardless who wins the trainers’ championship title, they have both had a very good season. For whoever I ride, I do my best. Hopefully I can get a few winners for them.”

The only thoroughbred contest and final race on the card is a 1,400m handicap that brings down the curtain on the Abu Dhabi season.

Seemar, looking increasingly likely to finish his maiden season with a licence as champion trainer, has five entered with Ranchero the choice of O’Shea.