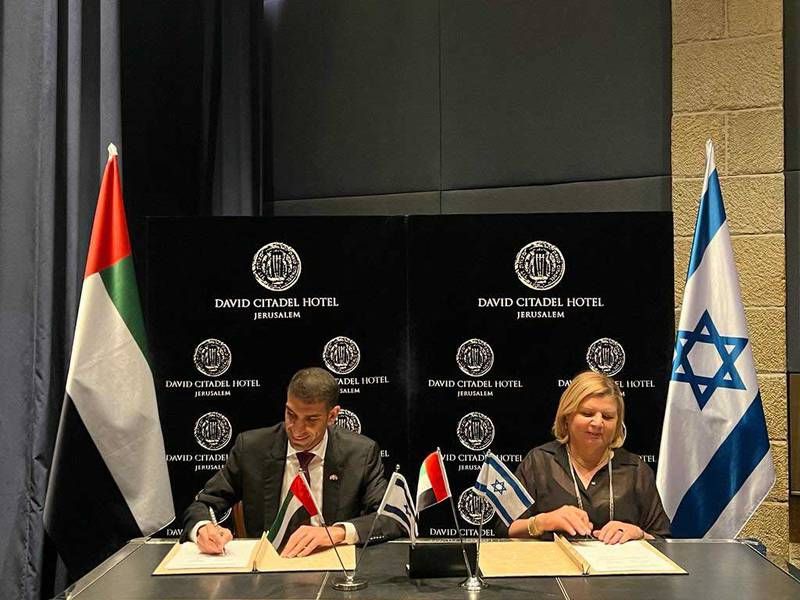 The UAE and Israel concluded talks on a Comprehensive Economic Partnership Agreement that is expected to boost non-oil trade and investment between the two countries. Photo: @ThaniAlZeyoudi / Twitter

The UAE and Israel have concluded talks on a Comprehensive Economic Partnership Agreement that is expected to boost non-oil trade and investment between the two countries.

The agreement is ready for signing and paves the way for a “new era of collaboration” in priority sectors such as agri-tech, med-tech, new energy energy solutions and advanced technology, Thani Al Zeyoudi, the UAE Minister of State for Foreign Trade, tweeted on Friday.

“This milestone deal will build on the historic Abraham Accords and cement one of the world’s most important and promising emerging trading relationships,” he said.

The Cepa talks come after the UAE and Israel normalised relations in September 2020, which led to dozens of initial agreements in sectors from aviation to shipping. Israel and the UAE began negotiations for a trade and economic co-operation deal in November 2021, a couple of months after the Emirates launched similar discussions with India.

The UAE signed a similar agreement in February with India, Asia’s third-largest economy, that is expected to boost non-oil trade between the two nations to $100 billion in five years, from $60bn currently.

The UAE-Israel Cepa has the potential to propel Israel on to the list of the UAE’s top 10 trading partners and will significantly boost trade and investments between the two countries, Hamad Buamim, president and chief executive of Dubai Chambers, told The National on March 1.

Trade between the countries reached $700 million within a year of the major agreement as they expanded co-operation in sectors such as finance and energy.

The UAE plans to sign eight Cepa deals this year and 27 overall, Abdulla bin Touq, UAE Minister of Economy, said this week at the Annual Investment Meeting in Dubai.

“If we want to double our economy from Dh1.4 trillion ($381bn) to Dh3 trillion in seven years that we have announced, we have to average a growth of about 5 per cent to 6 per cent,” the minister said on the sidelines of the event on Monday. “I’m hoping for that target to happen this year.”

The UAE is working to strengthen relations with key trading partners. It is currently in Cepa negotiations with Indonesia, the biggest economy in South-East Asia.

A similar deal is being negotiated with South Korea, which is expected to be finalised by the end of 2022. The agreement with South Korea aims to enhance the economic partnership between the two countries to a minimum of $20bn in the next three to five years.

We have concluded talks on a Comprehensive Economic Partnership Agreement with Israel and it is now ready for signature. This milestone deal will build on the historic Abraham Accords and cement one of the world’s most important and promising emerging trading relationships. pic.twitter.com/WgYgJ1YiLD

The UAE, the Arab world’s second-biggest economy, has made a strong recovery from the coronavirus-induced economic slowdown and has maintained strong trade momentum despite pandemic-related uncertainties.

The Central Bank of the UAE estimates that the economy will grow 4.2 per cent in 2022, higher than a previous forecast of 3.8 per cent.

The UAE economy is expected to grow 4.9 per cent in 2022, according to Japan’s largest lender, MUFG Bank, while Emirates NBD forecasts an expansion of 5.7 per cent and Abu Dhabi Commercial Bank estimates 5 per cent, supported by strong oil sector growth. Emirates NBD estimates the non-oil economy growing at 4 per cent, while ADCB forecasts 3.5 per cent growth.