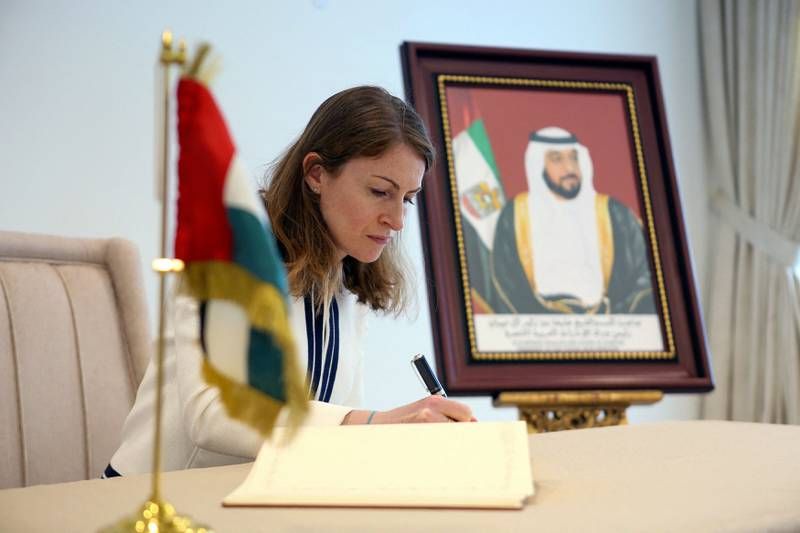 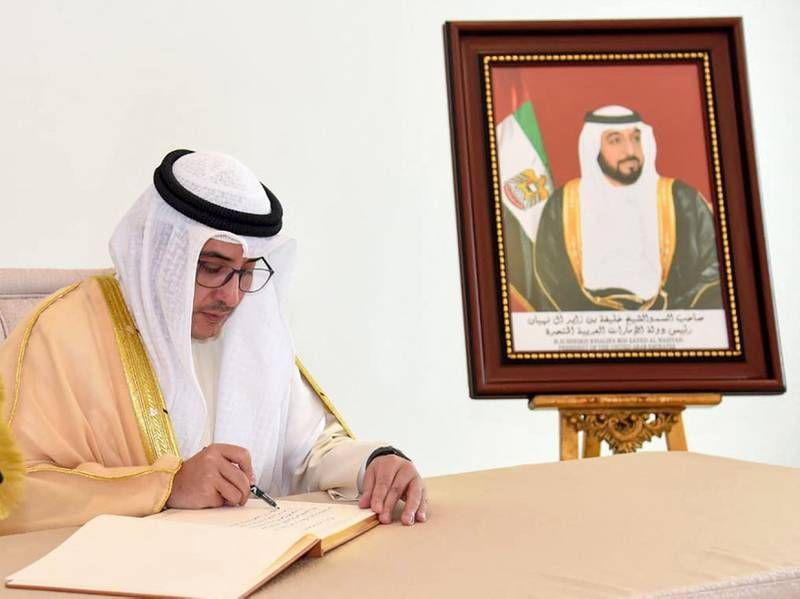 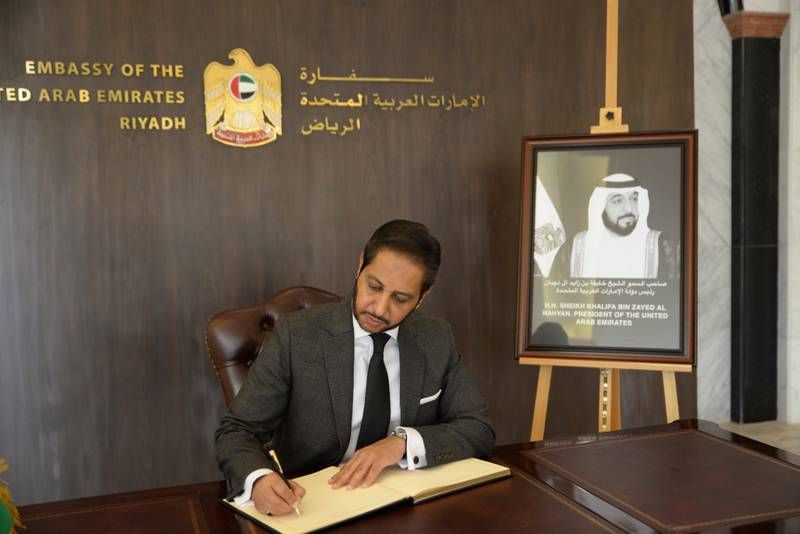 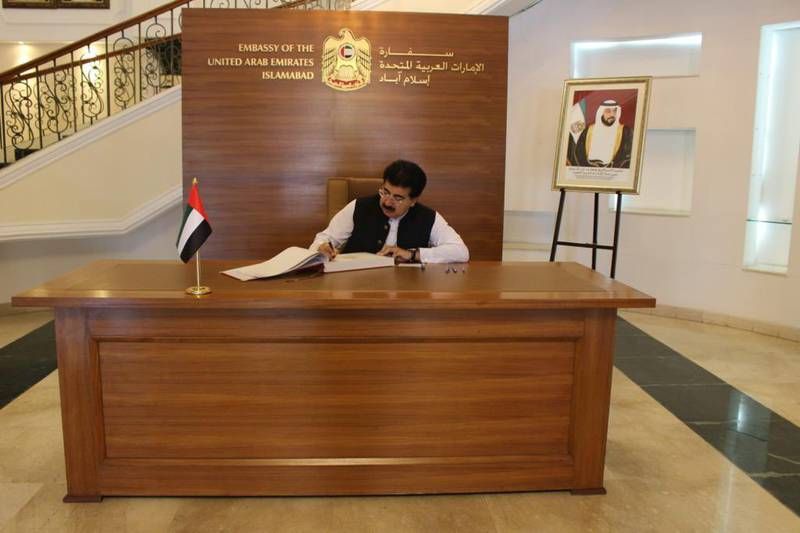 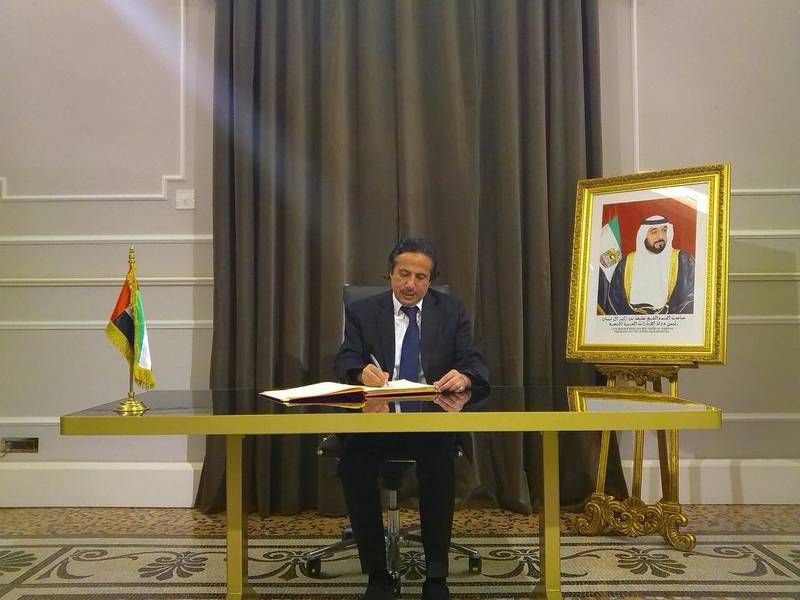 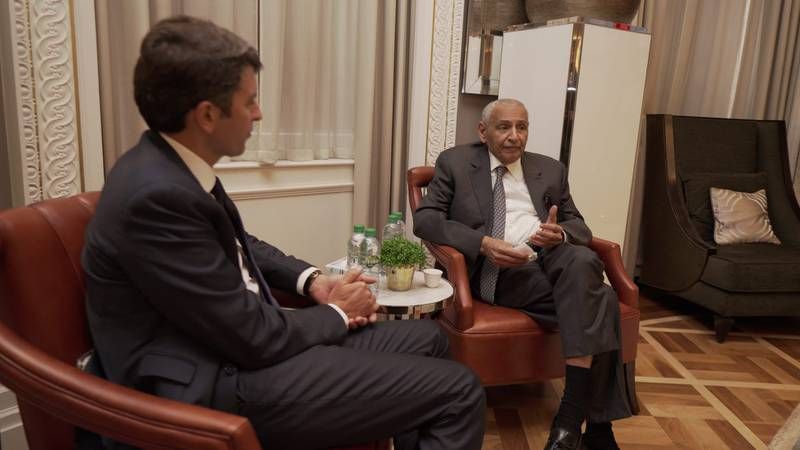 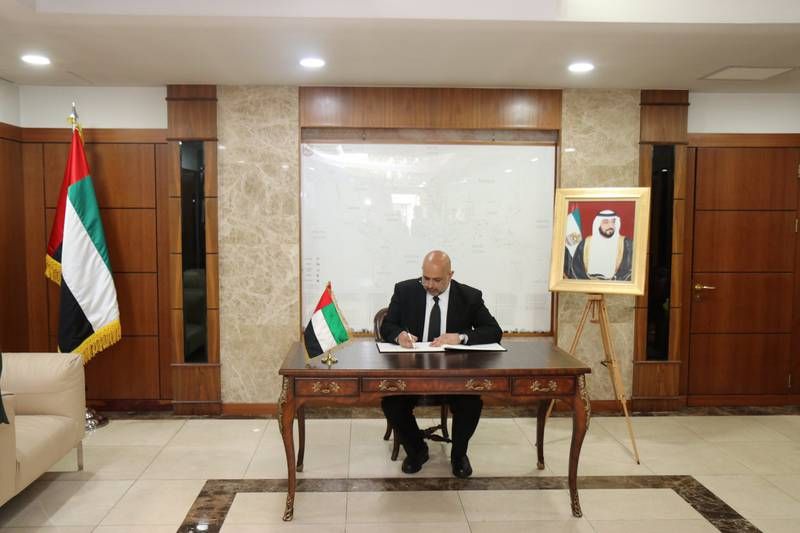 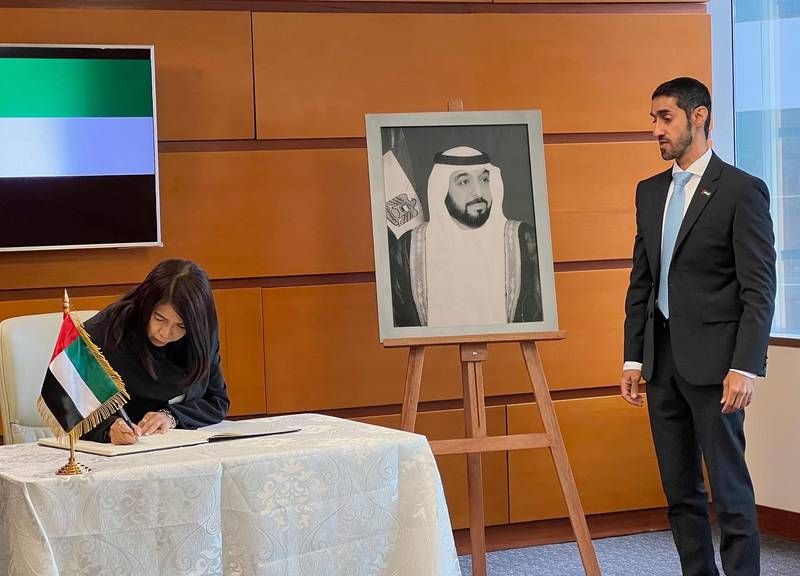 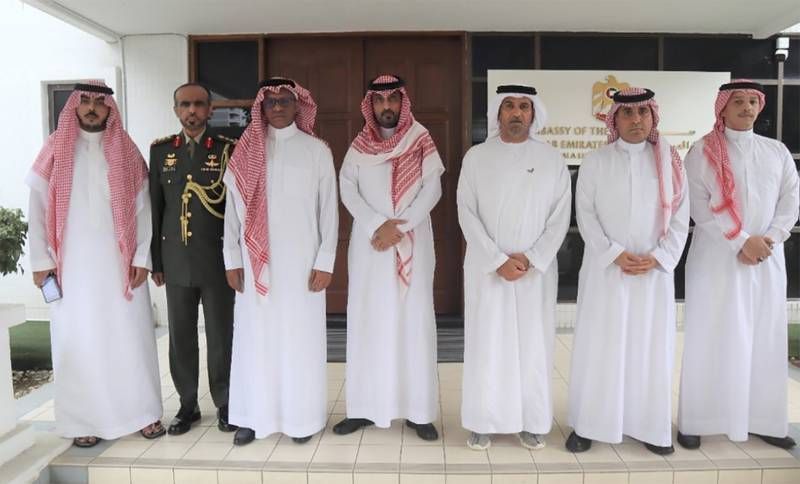 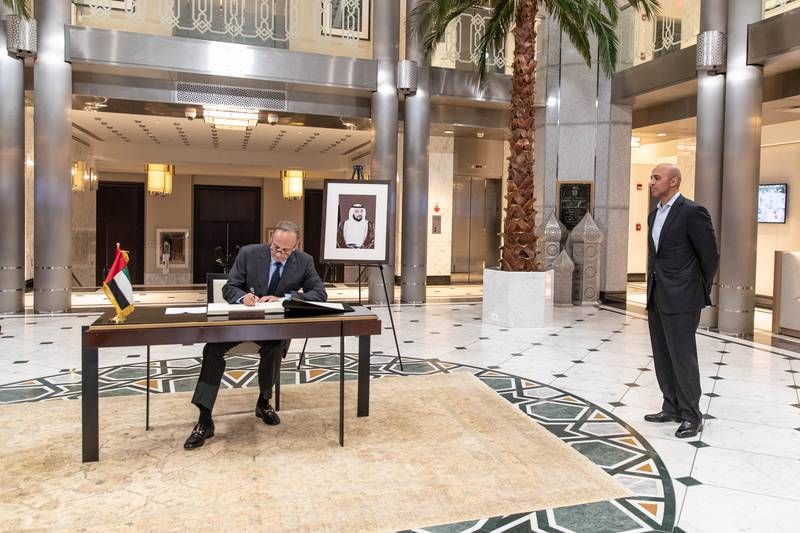 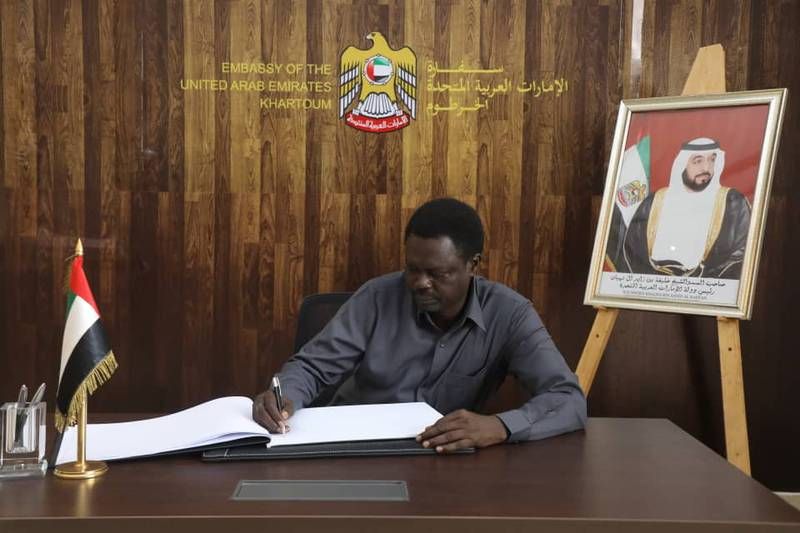 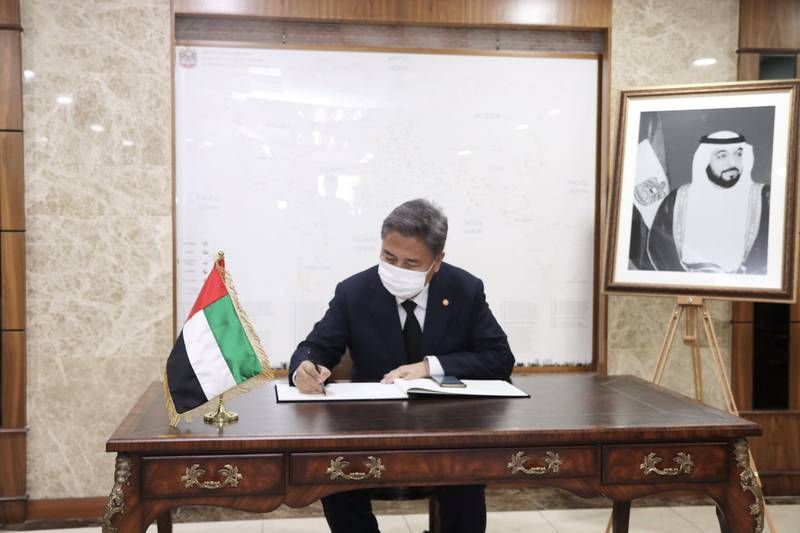 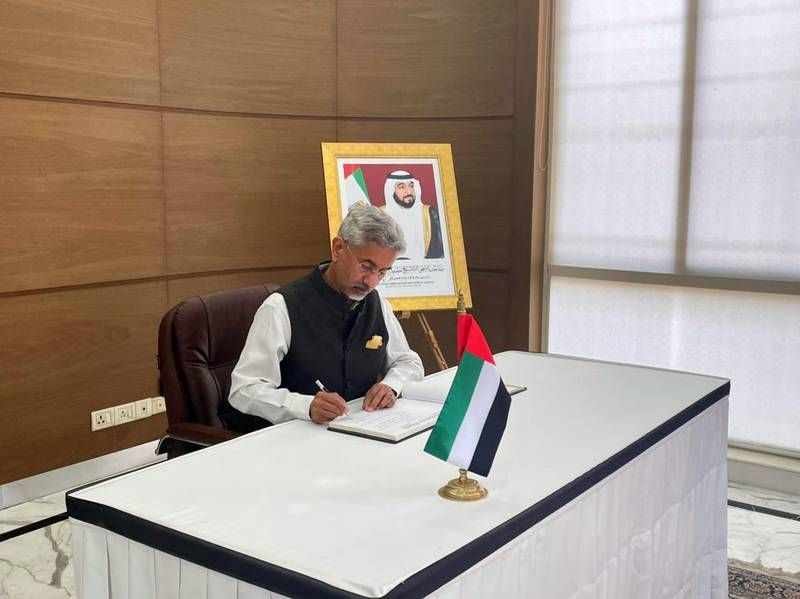 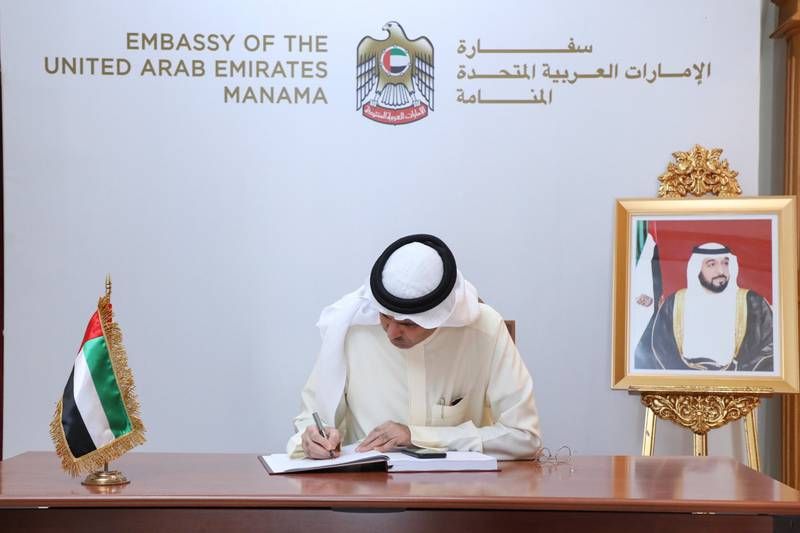 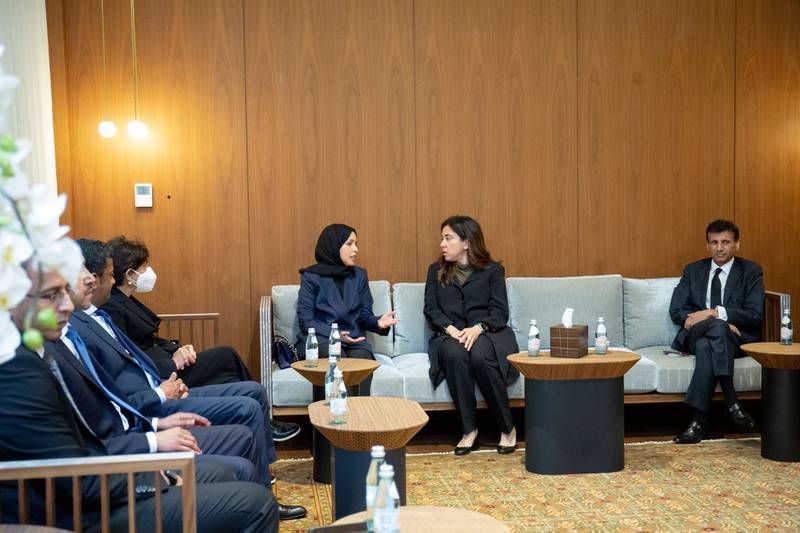 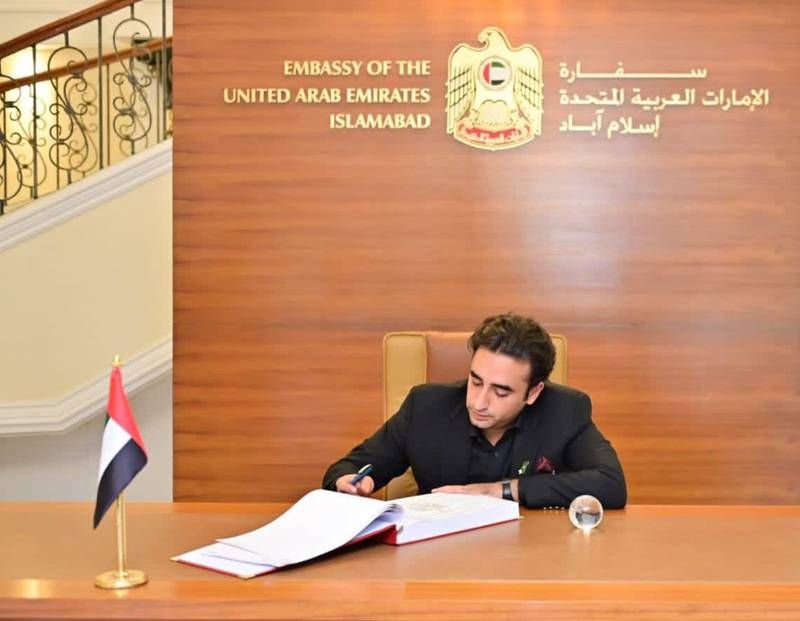 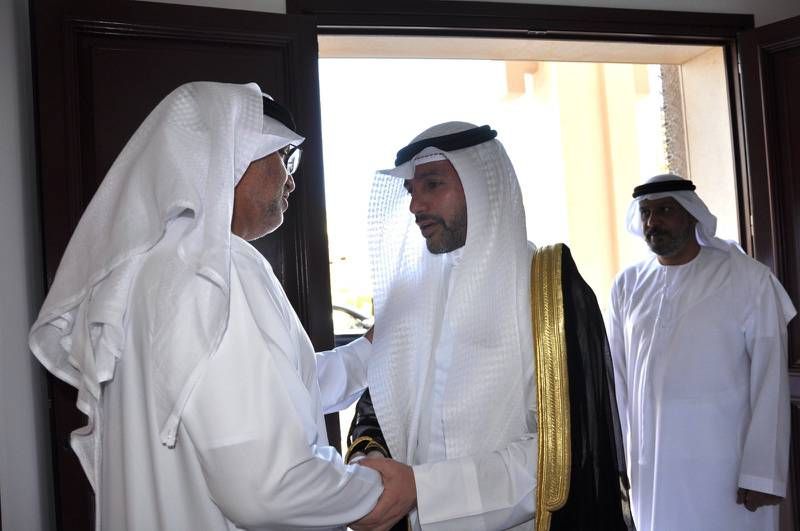 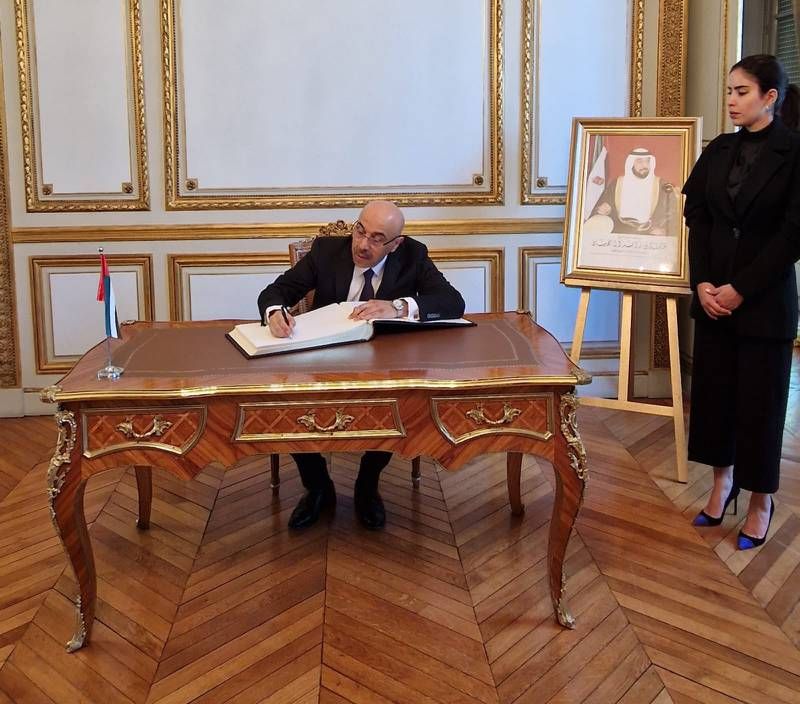 British ambassador to Kuwait Belinda Lewis writes in a book of condolences at the UAE Embassy in Kuwait City after the death of Sheikh Khalifa. AFP

UAE embassies around the world continue to receive people from the diplomatic community, who have been visiting to offer their condolences after the death of the President, Sheikh Khalifa.

He died on Friday afternoon at the age of 73.

In Seoul, Park Jin, Minister of Foreign Affairs of South Korea, visited the UAE embassy to offer his condolences.

Bader Al Awadi, ambassador of Kuwait to Seoul and Dean of the Diplomatic Corps for Arab countries in Korea, also visited the embassy in Seoul to pay tribute to Sheikh Khalifa.

Hend Al Otaiba, the UAE’s ambassador to France, received several diplomats and guests at the embassy in Paris, who offered their deepest condolences to the leaders and people of the Emirates.

Marzouq Al Ghanim, the Speaker of Kuwait’s National Assembly, visited the UAE embassy in Kuwait and offered his condolences.

In Boston, citizens of the UAE and other Arab countries offered the funeral prayers in absentia for Sheikh Khalifa at the Consulate General of Boston after the noon prayer on Saturday.

In Rome, Ambassador Omar Obaid Al Shamsi accepted the condolences of Sheikh Azzam Al Sabah, Ambassador of Kuwait to Italy, and of Ahmed Baomar, Oman’s ambassador to Italy. The diplomats visited the UAE’s embassy in Rome to grieve the death of Sheikh Khalifa and offer their condolences.

India’s Minister of External Affairs, S Jaishankar, visited the UAE embassy in New Delhi to sign the condolence book and conveyed the condolences of the Indian government to the leadership and people of UAE.

Heads of diplomatic missions to Saudi Arabia visited the UAE embassy to sign the condolence book and pay tribute.

Mikhail Bogdanov, Deputy Minister of Foreign Affairs and special envoy of the Russian president for the Middle East and Africa, visited the UAE embassy to pay tribute.

UAE Mission to the UN

Ambassador Lana Nusseibeh and UAE diplomats received ambassadors and diplomats from friendly nations including GCC and Arab states, who offered their condolences.

Since Friday, the embassy has received visitors from the US government and the diplomatic community in Washington, including ambassador Salem Al Sabah and diplomats from Kuwait and former US ambassador to the UAE David Mack.

In China, the UAE embassy received heads of missions, officials and members of the diplomatic community.

The UAE embassy in Argentina received ambassadors of sister Arab countries, as well other diplomats and dignitaries, who visited to mourn the death of Sheikh Khalifa and paid tribute to him.

Ambassador Iman Al Salami and representatives from the mission received mourners to offer their condolences.

Ambassadors and representatives of diplomatic missions in New Zealand, and officials from the country’s Ministry of Foreign Affairs and Trade extended their condolences.

Ambassador Khalil Yaqoub Al Khayat, Bahrain’s acting undersecretary of the Ministry of Foreign Affairs for Consular and Administrative Affairs, offered his condolences on the death of the deceased.

Several ambassadors to Malaysia and Malaysian officials and journalists attended the funeral prayer in absentia.

Mini Minawi, governor of the Darfur region in Sudan, offered his condolences.

The UAE’s ambassador to the UK, Mansoor Abulhoul, and fellow diplomats received visitors on Monday who came to express their condolences.

Leaders from around the world continue to arrive in Abu Dhabi to pay their respects following the death of Sheikh Khalifa and the election of the President, Sheikh Mohamed.

The UAE is in a mourning period that began on Saturday and normal working hours will resume on Tuesday.

The Ministry of Presidential Affairs said there will be 40 days of official mourning with flags at half-staff.