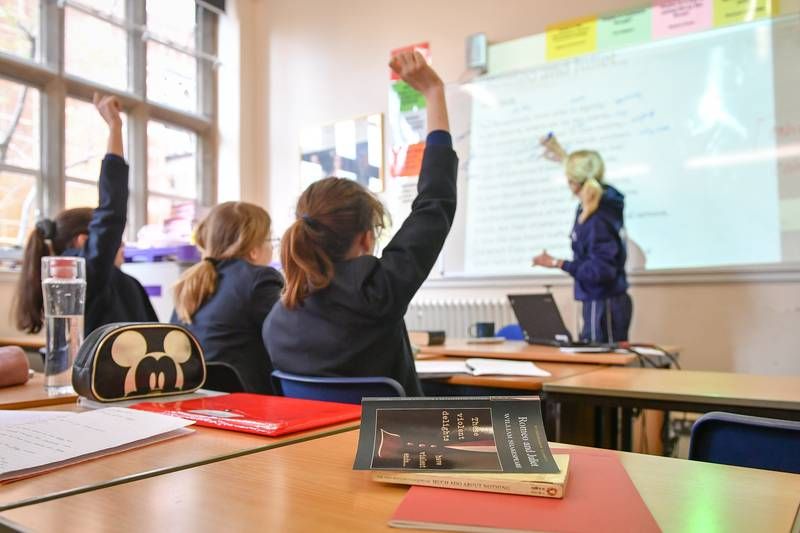 Some schools were so desperate to recruit that they offered roles before reviewing references, said one head teacher. PA

School leaders have been urged at a safeguarding conference in Dubai not to take short cuts when carrying out background checks on teachers in a rush to fill vacancies.

One head teacher said some schools were so desperate to recruit that they offered roles before reviewing references.

Recruiters were called on to inspect the CVs of candidates for potential red flags, including long gaps in employment history, and to verify qualifications, as part of a chain of safety protocols aimed at protecting children.

The Knowledge and Human Development Authority, Dubai’s private school regulator, requires candidates to produce a police clearance certificate, proving they do not have a criminal record, before they can obtain a work visa.

Those who have not resided in the Emirates for at least five years must show a police clearance certificate from each country of residence over the past five years under the rules.

QuoteSome schools are desperate to recruit and offer a role before asking for referencesNav Iqbal, principal at Gems Metropole School

But schools were told of the need to do more to ensure the suitability of teaching employees, such as closer scrutiny of potential misconduct which did not lead to criminal charges, as well as deeper dives into employment records to uncover any potential issues.

“There is always something to look at, particularly if schools are in a hurry to employ staff — we know it happens,” said Nav Iqbal, principal at Gems Metropole School, during the Child Safeguarding Middle East forum.

“Over two years ago in my school, the single central record would have information which was not up to date. And over nine months we focused on ensuring all the documentation requirements were up to date for new staff.

“Now we ask the same information for all staff working in the school, including those for annual maintenance contractors.”

Mr Iqbal said his school’s protocol now requires anyone working there to provide an Emirates ID and police clearance report so they can be enrolled on a single central record.

He said the practice should be standard across all UAE schools to maintain child safety.

“If schools don’t have these processes, they should be supported so they can adopt them,” he said.

“Child protection records need to be managed correctly in schools, as mistakes can be made.

“I have known schools elsewhere recruit over the phone as they have deadlines and targets to fill vacancies, particularly for specialist roles.

“This should not be happening but some schools are desperate to recruit and offer a role before asking for references.”

All teachers require police clearance before working in schools

All teachers require a police clearance certificate and will go through a security check as part of their visa application.

While no other checks are mandatory, many schools and other institutions will carry out their own background and credit assessments via a third-party company.

Recruiters were called on to increase scrutiny on potential teaching candidates, as gaps in CVs could be a red flag.

Outdated career histories without a reference from a candidate’s most recent employer, or references supplied from an unofficial address such as a Gmail or Yahoo account could not always be trusted, the conference heard.

Qualifications should always be legally attested and language used during interviews should be checked to ensure it is appropriate for a school setting.

The Ministry of Education’s teachers licensing system is an initiative that guarantees the development of teaching standards.

The Dubai Schools Inspection Bureau, which inspects more than 160 schools to ensure child safeguarding measures are in place and up to date, said improvements have been made.

“As regulators we must ensure that schools have effective procedures to ensure children are kept safe,” said Fatima Belrahif, chief executive of the bureau at the Knowledge and Human Development Authority.

“The DISB has prioritised health and safety to ensure schools have processes to protect children, while the UAE school inspection framework stresses the importance of regular procedures for their safeguarding.

“This framework provides a common language to guide inspectors.

“When we started this 14 years ago, around half of schools had health and safety procedures rated as good or better.

“Year after year, practices have been reviewed and improved to extend that. Now 93 per cent of schools have good inspections or better.”

Online safety improvements during the pandemic Child Safeguarding Conference Middle East aims to be a catalyst for change and to broaden regional thinking on protection issues.

“There are now local entities within the police that have specific child protection units, so they are very supporting with these issues,” said Zenub Khan, founder of CSC Middle East.

“Schools can work with police in their communities, to come in and speak to pupils and talk about digital safety.”

The conference heard from the Ministry of Interior about improvements made to online safety for children during the pandemic.

As more children stayed at home, most countries recorded a sharp rise in incidents of online abuse.

However, the Emirates bucked this trend, said Lt Col Abdulrahman Altamimi, from the Ministry of Interior’s Child Protection Centre.

“In 2020-21 there was an international increase in online referrals for online child sexual exploitation, as children were spending more time at home and online because of the pandemic,” he said.

“It is important that everyone knows they can report an incident and that it is safe to do so.

“It doesn’t matter who you are or your relationship to the child, we need to know so we can offer protection.”

A recent survey by Economist Impact asked more than 5,000 people aged 18-20 across 54 countries about their experiences online as children.

It found 44 per cent of respondents in the Middle East and North Africa region experienced online sexual harm in childhood.

“It is now easier for offenders to have access to children and something we are taking very seriously in our prevention programmes,” said Lt Col Altamimi.

“If we are responding to a crime, the damage has already been done.”