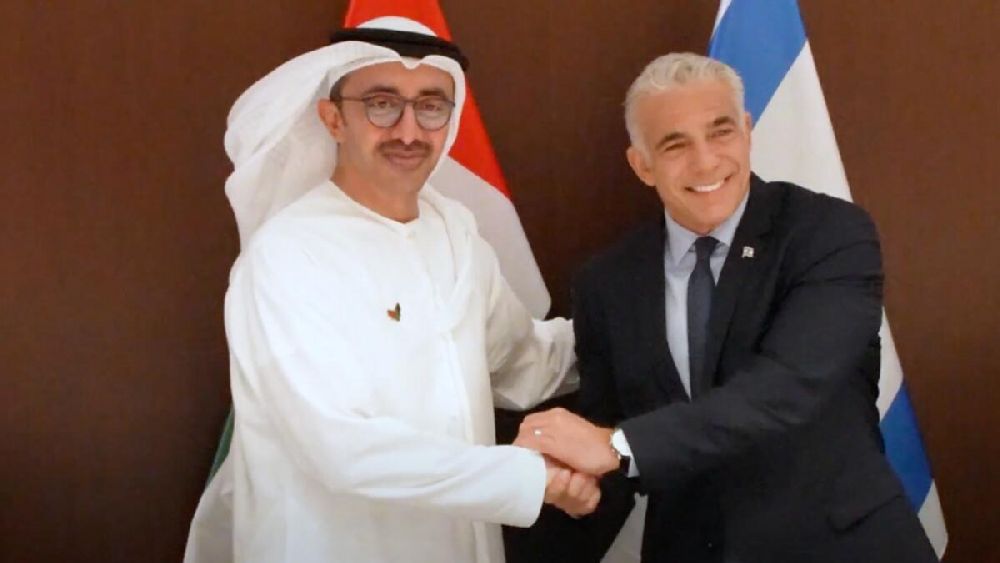 Sheikh Abdullah bin Zayed Al Nahyan, Minister of Foreign Affairs and International Cooperation, and Prime Minister of the State of Israel, Yair Lapid, have explored the avenues of enhancing the UAE-Israel relations as part of the Abraham Accords Peace Agreement, signed in 2020.

This came as part of the UAE Top Diplomat’s current official visit to Israel, during which he met with the Israeli premier to review issues of common interest, regional and international developments, and ways to enhance efforts to achieve peace and stability in the Middle East.

During the meeting, Sheikh Abdullah noted that the relations between the UAE and the State of Israel are moving forward towards broader horizons of cooperation across all fields.

The Israeli premier welcomed the visit of Sheikh Abdullah and his accompanying delegation, praising the privileged relations between the two countries.

Following the meeting, Sheikh Abdullah said: “Your Excellency, the Prime Minister, just two years ago, I was honored to be part of the signing of our Abrahamic Accords representing my beloved country, the United Arab Emirates. I am sure that not only myself but many of us who attended the signing of the Abraham Accords in Washington D.C. did not expect at the time that after two years we will be with the Israeli Prime Minister celebrating our second year of warm bilateral relations, not only between the two states, but between the two peoples as well.”

Sheikh Abdullah bin Zayed Al Nahyan pointed out in this regard that about half a million Israelis visited the UAE during the past two years, adding that there are about 7 to 8 flights per day between the two countries.

He highlighted the growth in the volume of trade exchange between the UAE and Israel, expressing his belief that the Free Trade Agreement between the two countries may be the fastest FTA signed by Israel.

Sheikh Abdullah said he looks forward to keeping the bilateral relations growing for the Emirati and Israeli citizens to reap the fruits of this partnership and promote a message of hope that the region badly needs.

For his part, the Israeli premier welcomed the visit of Sheikh Abdullah and the accompanying delegation, saying, “We celebrate today the visit of a strategic partner to our country. It’s a historic visit that will contribute to strengthening bilateral relations between the two countries at various levels.”He indicated that cooperation between the two countries is witnessing a steady growth, and the UAE and Israel have signed a comprehensive economic partnership agreement to achieve prosperity and sustainable development for their peoples.