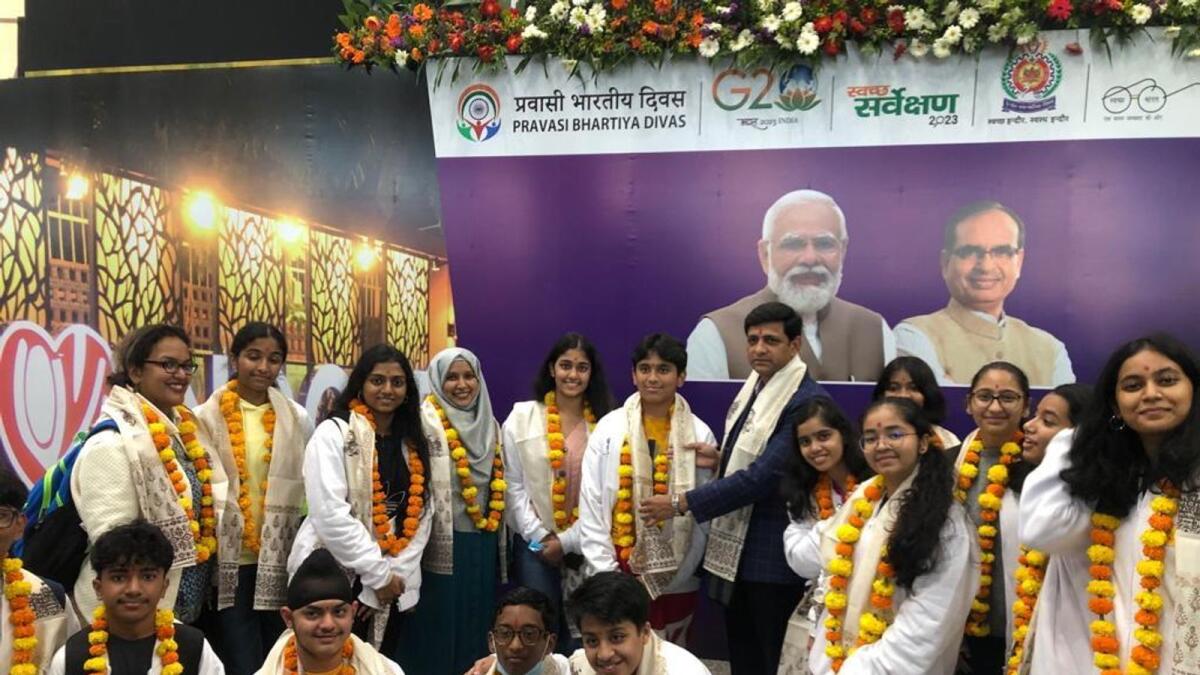 Pravasi Bhartiya Divas (PBD), the annual event for Indian diaspora, has welcomed a huge delegation of Indian expats from the UAE into Indore this year, including nearly 200 students.

The PBD convention, which is the flagship event of the Government of India, will conclude on Tuesday and provides an important platform to engage and connect with overseas Indians and to enable the diaspora to interact with each other.

The UAE students, who are attending the event, expressed their enthusiasm on seeing the Prime Minister of India, various ministers and other influential people in person. The students are a part of the largest delegation (around 750) from any foreign country to the event.

Many of the students opined that they felt more enlightened as they learnt about India’s growing trajectory and its success stories.

Diya Shah, Grade 9 Student of GEMS New Millennium School – Al Khail, said: “The Chief Minister of Madhya Pradesh, Shivraj Singh Chouhan, spoke to us about the spread of Indian influence in foreign companies like Google and Microsoft, and how successful people like Sundar Pichai and Indra Nooyi have had a positive impact on the worldwide view on Indians. He also included the fact that Madhya Pradesh, from being just a tiger state, has evolved into a leopard and cheetah state as well. With the support of their people and government, they were able to set up more national parks and reserves.”

Another attendee, Alaina Manoj, added: “During a special address, Zanet Mascarenhas, MP of Australia, talked about one of her team members Ajay Prakash, who owns an education start-up called “Edulevel”. She encouraged the youth to openly talk about failing and be smart if one fails small, to open the next best innovation. ‘Indian diaspora connects two cultures to make one culture’ – she left us to reflect on our past legacies and what our legacy will be.”

Highlighting the significant role of NRIs in the next 25 years, the prime minister also stated that India’s unique global vision and its role in the global order will be strengthened by them.

Nandana Praveen from GEMS New Millennium School – Al Khail said: “Dr S Jayashankar, Minister of External Affairs, began his address with the statement that ‘India is changing in front of our eyes and in a space and manner which is unprecedented’. He elaborated on the fact that there are over 34 million NRIs, and many of them have helped India. India was one of the worst-hit countries by Covid-19, and with the help of NRIs it was able to overcome the pandemic. He told us how the identity of the diaspora is closely connected to its roots. He ended with a motto by the PM of India, saying ‘we are related by blood to the NRIs not just a common passport’.”

Highlighting his takeaway, attendee Sundaresan Meyyappan from Dubai, said: “Indore was adjudged the cleanest city in India for the sixth time in a row in 2022. Making a city clean means turning it into an eco-friendly environment. There are many ways and solutions to make this happen. In order to take an initiative to keeping the environment eco-friendly, the Indian diaspora have planted various plants in the Global Garden. This gave all the delegates a high-spirited feeling.”

Punit MK Vasu, CEO, The The Indian High Group of Schools, noted: “It’s a fantastic feeling being part of the PBD held in person after four years.”

The heads of Indian schools in the UAE underlined that there is a very high sense of excitement and energy with the Indian prime minister personally addressing the gathering.

“Our students will have an opportunity to hear the President of India who will be addressing the conference tomorrow (Tuesday).”

Vasu added: “The strength of the Indian diaspora has gotten keener, better and stronger. The contributions of the NRIs and the support offered by them in sustaining and bettering the global economic situation during Covid and post-Covid is on full display at the convention. There is a specific focus this time around the youth of India and how they will play a role in the future of taking India to the world and bringing the world to India. The students from The Indian High Group of Schools have interacted with the Madhya Pradesh chief minister and also had a personal chat with the health minister. Such dialogue and interactions help students better understand bureaucrats, civil servants and their hard work in serving the largest democracy in the world.”