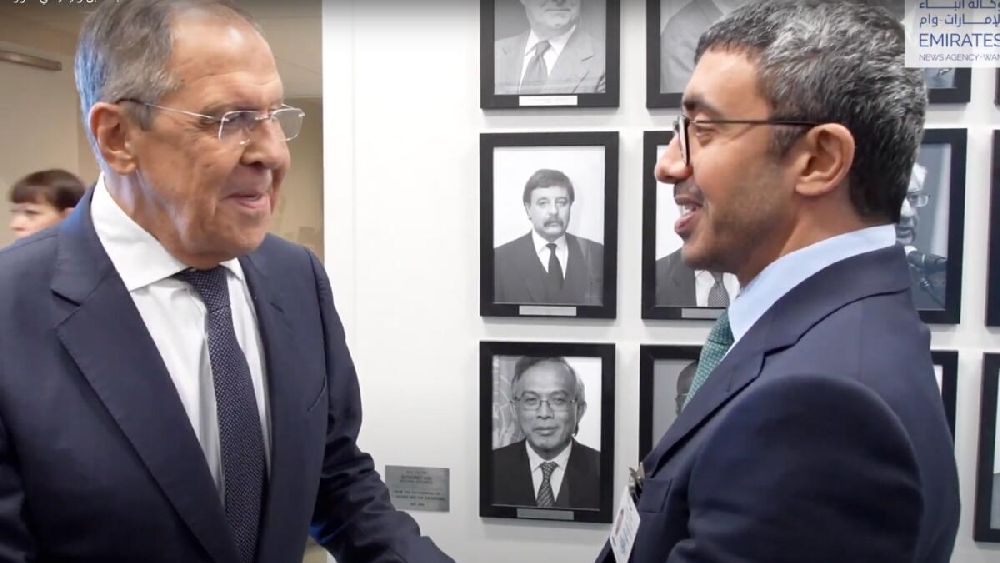 The UAE’s foreign minister has reiterated the country’s commitment to pursuing a peaceful solution to the Russia-Ukraine conflict.

This comes as Sheikh Abdullah bin Zayed Al Nahyan, the UAE’s Minister of Foreign Affairs and International Cooperation, met with Russian Foreign Minister Sergei Lavrov on the sidelines of the 77th session of the UN General Assembly (UNGA) in New York on Sunday. The two leaders discussed bilateral relations and joint strategic partnerships.

The two sides exchanged views on regional and international developments, including the crisis in Ukraine. Sheikh Abdullah stressed that the UAE is ready to support all efforts to find a peaceful solution to the conflict.

The foreign ministers also discussed the situation in the region and an array of issues of common concern, including energy and food markets and the importance of their stability to the global economy.

Here’s a video of the meeting:

Sheikh Abdullah highlighted the strength and depth of the relations between the UAE and Russia, saying it has helped achieve sustainable economic growth and enhance the prosperity of their people.

The meeting was attended by Reem bint Ibrahim Al Hashimy, Minister of State for International Cooperation; Ahmed Ali Al Sayegh, Minister of State; and Ambassador Lana Nusseibeh, Assistant Minister for Political Affairs and Permanent Representative of the UAE to the United Nations.

Meeting with other foreign ministers

They exchanged views on regional and international developments and reviewed bilateral cooperation and partnership between the UAE and these countries in several sectors — from sustainability to food security, economy, education, tourism, investment and culture.

He also briefed the ministers about the UAE’s efforts to combat climate change and its preparations to host the 28th Conference of the Parties (COP28) in 2023.

He then met with Sima Bahous, the executive director of the United Nations Entity for Gender Equality and the Empowerment of Women (UN Women) and undersecretary-general of the UN. The leaders discussed how a whole-of-society approach could drive women empowerment and the gender equality agenda.

The two also discussed the critical role of women in conflict prevention and resolution as well as in peacebuilding. In this regard, they discussed continued cooperation through the UAE’s Sheikha Fatima bint Mubarak Women Peace and Security training initiative in partnership with UN Women.

The foreign minister also met with Ralph Gonsalves, Prime Minister of Saint Vincent and the Grenadines, reviewed issues, including climate change and global efforts to combat it and stressed the importance of deploying renewable energy solutions.