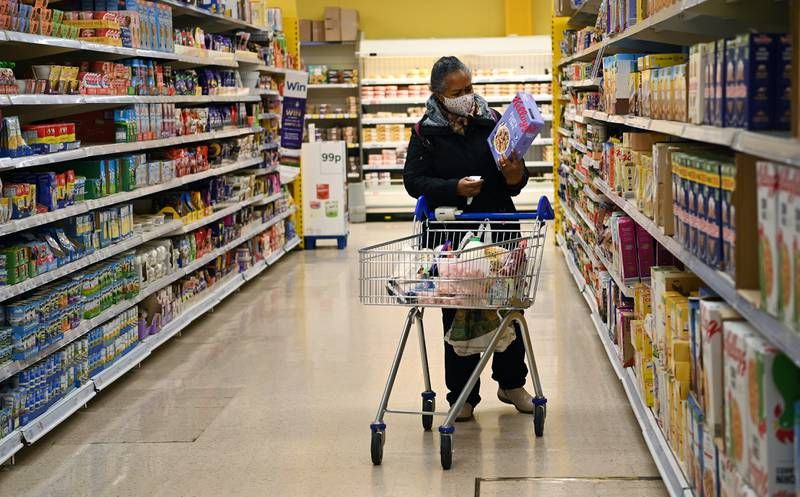 February’s inflation reading was higher than expected as fuel, energy and food costs to the British consumer rose. EPA

Britain’s inflation rate surged to a 30-year high of 6.2 per cent in the year to February, adding to pressure on policymakers to protect consumers from the soaring cost of living.

February’s reading was higher than expected as fuel, energy and food costs rose, according to the Office for National Statistics, squeezing household budgets again.

“Inflation rose steeply in February, as prices increased for a wide range of goods and services, for products as diverse as food to toys and games,” said Grant Fitzner, chief economist at the Office for National Statistics.

The jump in inflation from 5.5 per cent in January means prices are rising faster than wages. The Bank of England expects the inflation figure to hit double digits this year.

Chancellor of the Exchequer Rishi Sunak now faces a growing number of calls to offer more support to householders who are struggling to pay higher bills.

Mr Sunak has pledged to help the hardest-hit in his spring economic statement on Wednesday, adding to the £21 billion of measures set out to help on electricity and natural gas bills.

However, Myron Jobson, senior personal finance analyst at interactive investor, said “there are simply not enough tools in the personal finance box of tips and hacks to protect those living on a bare bone budget from rising prices”.

“For the second month in a row, transport saw the highest rate of inflation this month, while food inflation rose slower than the headline rate,” she said.

“Many supermarkets have expanded their value ranges to support individuals and households on lower incomes. Nonetheless, with retailers struggling to absorb these higher costs, shop prices look set to rise in the coming months.”

“Furniture and flooring also contributed to the rise in inflation as prices started to recover following new year sales,” he said.

“The price of goods leaving UK factories has also been rising substantially and is now at its highest rate for 14 years.”

Inflation, which has risen from 0.4 per cent when the UK locked down for the coronavirus pandemic a year ago, has overshot forecasts in eight out of the past 10 months.

The index rose 0.8 per cent in the month of February alone, the biggest increase since 2009.

The Bank of England has raised interest rates three times since December, taking them to 0.75 per cent this month, and it may act again next month.

The BoE is concerned that will lead to a broader increase in prices across the economy, potentially prompting workers to demand higher wages and fuelling an inflationary spiral.

Mr Sunak and the Treasury are worried about the effect on the poorest households who are already having trouble paying their utility bills.

Gas prices have surged over the past year with a reduction in supplies from Russia. The invasion of Ukraine raises the risk that those shipments are further limited, either by the government in Moscow or by sanctions imposed by western nations.