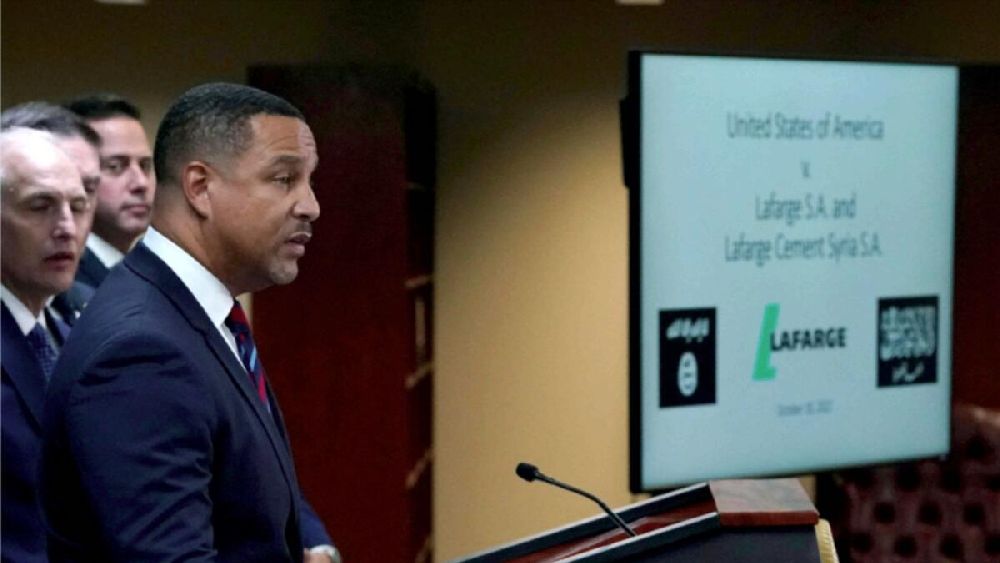 French cement giant Lafarge SA will pay a $778 million fine after pleading guilty to providing material support to Daesh and other terror groups during the Syrian civil war, the US Justice Department said on Tuesday.

Lafarge acknowledged it paid millions of euros to middlemen to keep its Syrian cement factory running in 2013 and 2014, long after other firms had pulled out of the country — in what the Justice Department branded an “unthinkable choice”.

Earlier this year, a French court ruled that the company was aware that much of the money had gone to finance Daesh operations.

Lafarge SA and its defunct subsidiary Lafarge Cement Syria “have agreed to plead guilty to one count of conspiring to provide material support to designated foreign terrorist organizations in Syria,” the company said.

“In the midst of a civil war, Lafarge made the unthinkable choice to put money into the hands of Daesh, one of the world’s most barbaric terrorist organisations, so that it could continue selling cement,” Peace said.

“Lafarge did this not merely in exchange for permission to operate its cement plant — which would have been bad enough — but also to leverage its relationship with Daesh for economic advantage.”

Lafarge invested 680 million euros in the construction of its plant in Syria, which was completed in 2010 — just a year before the outbreak of the ongoing war that is estimated to have killed more than half a million people.

Rights activists have expressed hope the case would serve as a bellwether for prosecuting multinationals accused of turning a blind eye to terrorist operations in exchange for continuing to operate in war-torn countries.

In its own statement, Lafarge said: “Lafarge SA and LCS have accepted responsibility for the actions of the individual executives involved, whose behaviour was in flagrant violation of Lafarge’s Code of Conduct.

“We deeply regret that this conduct occurred and have worked with the US Department of Justice to resolve this matter.”

Holcim Group, the Swiss conglomerate which took over Lafarge in 2015, said the US Justice Department had cleared it of any wrongdoing.

It said it only learned of the allegations in 2016, and launched its own probe and cooperated with US justice authorities.

“None of the conduct involved Holcim, which has never operated in Syria, or any Lafarge operations or employees in the United States, and it is in stark contrast with everything that Holcim stands for,” it said in a separate statement.

The company statements came shortly before a planned press conference by Justice Department officials in New York to announcement the settlement of the longstanding case.

Shares of Holcim were temporarily suspended on the Swiss stock exchange after news of the fine emerged.