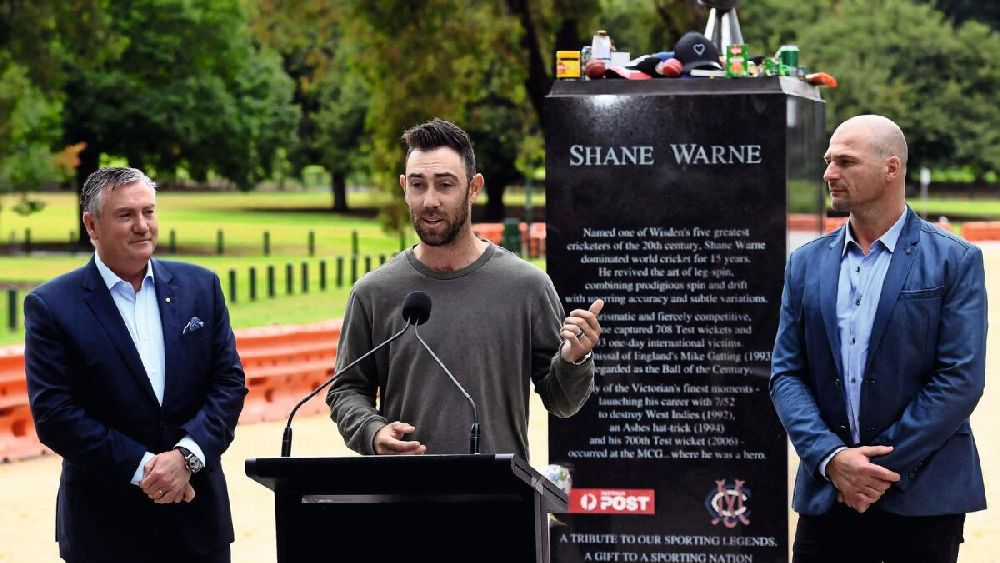 Shane Warne mixed with Mick Jagger and Elton John, bowled to Ed Sheeran in the practice nets at the spiritual home of cricket, and for a while, was engaged to be married to Liz Hurley.

He had poker face for poker, a head for cricket and a knack for taking wickets and for making friends.

In the wake of his death from a suspected heart attack at the age of 52 in Thailand on March 4, “larger than life” was a typical description of the Australian leg-spin bowler from his fellow cricket stars, actors, comedians, musicians, politicians, personalities and everyday fans.

With his tinted blond hair, mischievous demeanor and competitive streak, Warne transcended a sport which, because of his prodigious talent, launched him into popular culture in the far-flung parts of the cricket world.

You can’t bowl the so-called “ball of the century” — he dismissed England veteran Mike Gatting in 1993 at Manchester — without getting noticed in Britain, the Indian subcontinent, the Caribbean, southern Africa and Australasia.

Coldplay vocalist Chris Martin wrote a song, The Eulogy, which was played at the private family funeral on March 20.

On Wednesday, it will be one of the tributes, along with others from Elton John, Robbie Williams and Sheeran, played at a public memorial service at Warne’s beloved Melbourne Cricket Ground.

More than 50,000 people will gather for the memorial at the stadium where Warne produced some of his milestone moments — including taking his 700th wicket in Test cricket in 2006, something he was the first to achieve.

A section at the vast MCG venue will be renamed in Warne’s honour. A statue of Warne in a full delivery stride already stands outside the stadium and has become an unofficial place for people to reflect and lay tributes for the last three weeks.

Much of Warne’s fame can be attributed to his instant success in the Ashes, the storied and intense cricket rivalry between England and Australia, a former colony, that dates back to the 1800s and has produced some of the iconic moments in the sport.

A leg-spinner — a kind of wrist-spin bowling that wasn’t common at the highest levels of the game in the early 1990s — Warne was developing a reputation as a mystery bowler when he arrived in England for the 1993 Ashes series a little over a year into his international career.

“I felt we had a weapon that no one else in world cricket had,” Mark Taylor, a teammate on that tour and a future Australia captain, said in the Amazon Prime documentary “Shane” which was released weeks before Warne died.

With his very first delivery in Ashes cricket, Warne mesmerized Gatting by landing the ball on the pitch outside the batter’s legs and spinning back hard across to hit the stumps.

The look of disbelief on Gatting’s face said it all. The footage has been replayed millions of times. Warne said it changed his life at a young age, recalling how he’d walk around seeing kids imitating his bowling and having 20 photographers outside his hotel wherever he stayed in England.

Ian Botham, one of England’s greatest ever cricketers, told the documentary that Warne “revolutionized the whole concept of Test cricket. He was box office. He took the whole game by the scruff of the neck.”

He certainly generated headlines, good and bad, particularly for the tabloids. He had affairs that led to the breakdown of his marriage to Simone Callahan, after the couple had three children. He was suspended from cricket for 12 months for taking a diuretic — he said it was contained in a diet pill he’d taken for weight loss — and he was reprimanded for giving pitch and weather information to a bookmaker.

But every time he stepped on the field, he was up for the contest, something fans and critics unanimously acknowledged. He retired from Test cricket in 2007 with a then world record 708 wickets.

Warne often described himself as just a knockabout bloke, an ordinary Australian who liked a drink and a joke and who happened to discover a talent for spinning a leather ball.

TV commentator Eddie McGuire, who has been helping prepare the memorial service, is expecting a big crowd.

The MCG has “held everything from Olympic Games to papal visits … to the first ever Test match between Australia and England in 1877,” McGuire said. “Tomorrow night … the MCG will again resonate around the world with something absolutely significant: and that is the farewell to the people’s champion.”

Warne’s three children — Brooke, Jackson and Summer — will be on stage during the two-hour memorial which will be broadcast live across Australia and include the musical performances as well as video tributes from, among others, India’s cricket great, Sachin Tendulkar.

Friends within the cricket fraternity and entertainers described him as loyal and always ready to help and would talk equally to people from all walks of life. He remained in cricket as a popular television pundit.

And he remained on good terms with Callahan, his wife of 10 years, and with Hurley, the British actress and model, despite their broken engagement.

“I feel like the sun has gone behind a cloud forever. RIP my beloved Lionheart,” Hurley posted on Instagram after Warne’s death was announced.

Chris Martin recalled how his band was making it big in England when he met Warne in an elevator and they bonded immediately.

In Sheeran’s opinion, Warne was “one of the few rock-and-roll sportsmen.”

“And I think people really liked that about him.”