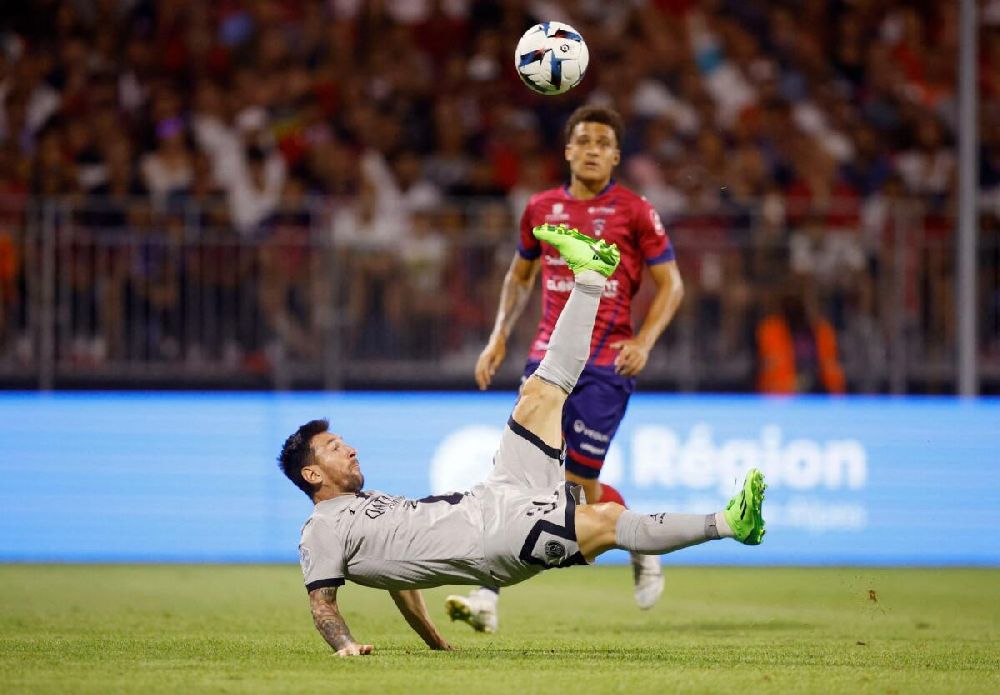 Lionel Messi scored twice in the second half, including with a stunning overhead kick, as Paris Saint-Germain began their defence of the Ligue 1 title with a 5-0 demolition of Clermont on Saturday.

Neymar was also in outstanding form for a PSG side who did not miss the injured Kylian Mbappe, with the Brazilian opening the scoring in Clermont before setting up Achraf Hakimi and Marquinhos for further goals before half-time.

Messi then exchanged passes with Neymar before sidefooting in the visitors’ fourth goal with 10 minutes left.

Yet Messi saved the best for last, darting into the box four minutes from the end to control a Leandro Paredes pass on his chest with his back to goal, before converting with an acrobatic overhead kick.

That goal had the crowd at Clermont’s Stade Gabriel-Montpied singing the name of the seven-time Ballon d’Or winner, who endured a difficult first season in Paris.

PSG’s victory in new coach Christophe Galtier’s first league game in charge was achieved despite Mbappe missing the trip due to an adductor injury.

“There’s nothing more to say. We all know what he’s capable of. He’s been playing at a very high level for 17 years, he had a tough season last year as he was getting used to things. But every previous season he scored at least 30 goals.

“Now he’s had a full pre-season to prepare, he’s settled with his family but also in the team, and now there’s no reason to think that he won’t have a great season,” he added.

Mbappe also missed last week’s 4-0 defeat of Nantes in the season-opening Champions Trophy due to suspension.

Messi had opened the scoring in that game, while Neymar netted a brace.

The duo therefore already have six goals between them this season, with PSG looking in ominous form.

“There is no denying we have lots of talent but what I retain is the collective desire to win the ball back very early, to play with intensity, to never let up,” Galtier told Canal Plus.

“The squad have been very receptive since I arrived. They like to work hard together, have fun together. But the season is long. This was just the first game.”

Galtier said he would have no trouble finding a place in the line-up for Mbappe, who is expected to return next weekend and play his first competitive game since turning down a move to Real Madrid to sign a new three-year deal in Paris.

“Kylian is an essential part of this project. For a coach, it is not very difficult to integrate a player like him into the team,” Galtier said.

“He had a little alert and so we didn’t want to take any risk.

“Obviously if we had a difficult game, or a Champions League match, maybe Kylian would have played. We preferred to delay his comeback but he should be back against Montpellier.”

Neymar fired in the opener in the ninth minute after Messi was unable to control Pablo Sarabia’s cutback, and it was Neymar who set up Hakimi to blast in the second in the 26th minute.

The world’s most expensive player was also the provider for the third goal in the 38th minute when his free-kick from the left was headed in by Marquinhos.

Messi then took over at the end, and it is likely to be a long season for Clermont given four teams will be relegated at the end of the campaign, when Ligue 1 will be reduced from 20 clubs to 18.

Earler Monaco benefited from a favourable late VAR call to claim a 2-1 win at Strasbourg.

The principality side were 2-0 up and cruising when Sofiane Diop struck early in the second half to add to Krepin Diatta’s magnificent opener.

However, Habib Diallo pulled one back for Strasbourg and then appeared to have salvaged a draw when he nodded home in the second minute of added time, only for the referee to disallow the goal for a marginal offside after consulting with the VAR.

Monaco now travel to the Netherlands to face PSV Eindhoven in their Champions League third qualifying round, second leg in midweek. The first leg ended 1-1.

Lyon beat newly-promoted Ajaccio 2-1 on Friday in the season curtain-raiser, with Alexandre Lacazette scoring what proved to be the winner with a penalty.