What made Elsa Schiaparelli a designer ahead of her time? A retrospective of her works has the answers 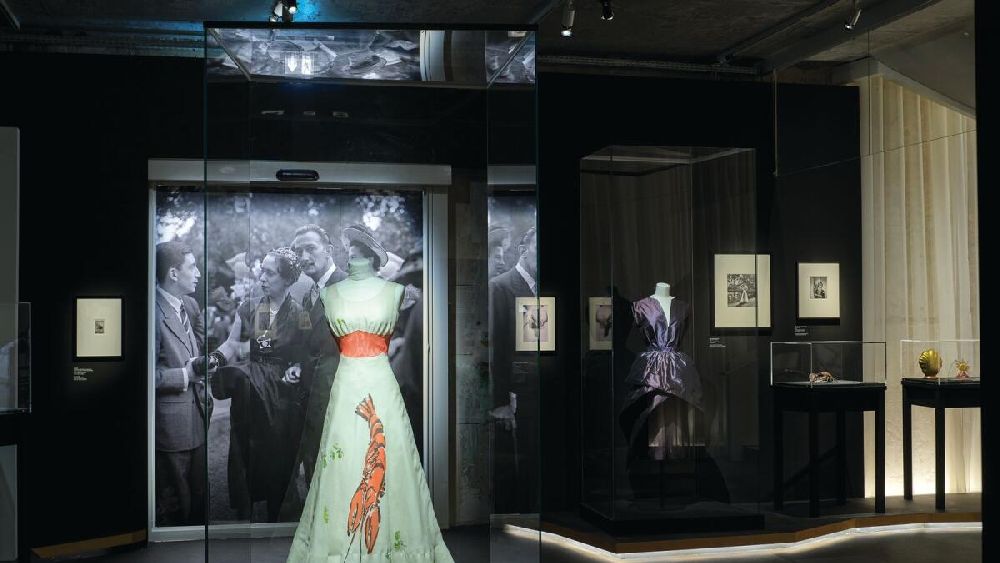 Though fashion industry titan Gabrielle ‘Coco’ Chanel dismissed her rival Elsa Schiaparelli as “that Italian who makes clothes”, later couturiers recognised the Italian designer as one of the most influential figures of 20th century high fashion. Madame Schiaparelli — also known as “Schiap” to her close friends — drew inspiration from the Parisian avant-garde of the 1920s and 1930s, especially surrealism, which took its roots from the Dada movement.

Julien Levy, an American art dealer who organised the first surrealist show in New York in 1932, described her as “the only designer who understands surrealism”. She pioneered cutting-edge fashion, and her designs were extravagant, innovative, and oneiric. She dared to be different and advised women to do the same. She was a maverick in her time, the manifestation of a visionary personality driving an independent-minded artist and feminist.

My trip to Paris to catch the Schiaparelli retrospective was well worth it. The Musée des Arts Décoratifs hosts ‘Shocking! The surreal world of Elsa Schiaparelli’ until January 22, 2023. It is a two-storey show that features Schiaparelli’s daring work, gaining a new perspective today. The introductory room presents the couturière’s sketches. On display are 520 designs, 272 silhouettes and accessories, including perfumes and jewellery, alongside iconic paintings, sculptures, ceramics, and photographs by her dear artist friends: Man Ray, Salvador Dalí, Jean Cocteau, Meret Oppenheim and Elsa Triolet. The collections highlight Schiaparelli’s leading sources of inspiration: Italian antiquity, Roman mythology, nature, music and circus.

Elsa Schiaparelli was born in Rome on September 10, 1890, at the elegant Palazzo Corsini in Trastevere, to a prominent family of Piedmontese intellectuals. Her father was Celestino Schiaparelli, a noted professor of Arabic language and literature at the University of Rome. Her mother, Giuseppa Maria de Dominicis, was a Neapolitan aristocrat related to the House of Medici. Elsa’s uncle, Giovanni Schiaparelli, director of the Brera Observatory in Milan, was the astronomer who discovered a network of canals on the surface of Mars. His other interests in psychic phenomena and esoteric mysteries influenced his niece, who later, in 1938, paid homage to her uncle through the Zodiac collection. In addition, Elsa’s cousin Ernesto was a lauded Egyptologist and founder of the Egyptian Museum in Turin.

As a kid, her mother would scold Elsa for being different and homely looking, but the rebellious teenager dreamt of becoming an actress. That was unrealistic as the family’s social position could not allow her to have a career on stage, so Elsa studied philosophy at the family’s behest and kept her poems a secret until 1911, when she had a book of sensual poetry published. The book attracted the ire of the family. “To the family, the book came as a bombshell,” wrote former top model Marisa Berenson, Schiaparelli’s granddaughter, in her intimate memoir Elsa Schiaparelli’s Private Album. “The newspapers got very busy. Extracts from the poems were reproduced all around Italy and abroad. Elsa’s father considered the whole thing a disgrace and would not read the book.”

As punishment, the young Elsa was sent to a convent boarding school in Switzerland, where she started a hunger strike that convinced her parents to revoke their original decision. Elsa wanted to be herself. To bloom, she had to leave the past behind. And that day came when she moved to London to work as a nanny. One evening she attended a lecture on theosophy at the Occult Club in Piccadilly. The speaker was William de Wendt de Kerlor, a conman who posed as a count and paranormal expert. Elsa was immediately smitten with the enigmatic lecturer, and the next day they became engaged. They married in the summer of 1914, a week before WWI started. As the couple subsisted on her wedding dowry and benefited from her family trust, de Kerlor attempted to earn a living as a psychic practitioner. Still, a year later, he was unceremoniously deported from England for practising fortune-telling. The couple retreated to the south of France, ready to emigrate to the US in 1916.

In the meantime, Elsa’s marriage turned out to be a disaster and de Kerlor left not long after the birth of their daughter in 1920. Elsa had to respond to difficult times as the little Maria Luisa, nicknamed ‘Gogo,’ was diagnosed with polio.

In 1922, an American friend convinced Elsa to go to Paris to seek medical treatment and provided a free domicile. Gaby Picabia also returned to Paris and introduced her to the Dada artists who frequented Le Boeuf Sur le Toit, a cabaret in Montmartre. The Roaring Twenties had just started. She found a job as an assistant of American visual artist Man Ray, who had just founded his Dada magazine Société Anonyme. She felt an affinity with provocative Dada art. Surrealism was gradually emerging. For a while, the two art movements co-existed in a continuum of shared energy. André Breton’s first Surrealist Manifesto appeared in 1924. Influenced by the psychoanalytic studies of Sigmund Freud, surrealist artists tried to expand the mind’s potential by reconciling the contradictory states of dream and reality. Elsa was in tune with those doctrines.

But she had something more contingent to solve. “Life, for me, was rather dull, with a great deal of solitude,” she wrote in her memoir Shocking Life published in 1954. In her early years in Paris, she faced poverty. “But though things were dark and mysterious, she was nearly happy — with the happiness of the tramp who, having found a room for the night, watches the winds and the rain raging outside,” she wrote. Yet, poverty was a catalyst for action. “Poverty forced me to work and Paris gave me a liking for it and courage,” she wrote. She was a single mother, and she knew that she would not marry again.

The encounter with Paul Poiret, the Paris designer who freed women from the corset, changed her life. His sartorial creations mesmerised her when she tried them on in his atelier. But she could not afford them. Poiret gifted her several pieces to help publicise them. With Poiret’s encouragement, Elsa began to design clothes and sell them on a freelance basis. She briefly became the designer of a small house, Maison Lambal, and in 1927, she opened her eponymous fashion house. “Poiret generously mentored Schiaparelli, who was searching for a style of her own,” says Dilys Blum, an American fashion historian.

The same year, in 1927, she made a name for herself by creating a knitted jumper with a surrealist twist. After admiring a curiously stitched sweater worn by an American friend, she sought out the woman who knitted it, an Armenian refugee in Paris. After meeting with her, Schiap commissioned her to make a series of sweaters featuring a trompe l’oeil design of a white bow around the neck with coordinated details at the cuffs. “If I make a design, will you try to copy it?” she asked the Armenian peasant. “So I drew a large butterfly bow in front, like a scarf around the neck — the primitive drawing of a child in prehistoric times,” she wrote. The young designer wore the sweater to a luncheon of fashion buyers and an American wholesaler interested in importing avant-garde Parisian styles asked for 40 with matching skirts. “Convinced deep within me that I was nearly glamorous, I wore it at a smart lunch — and created quite a furore. All the women wanted one, immediately,” she wrote in her autobiography. Vogue called the design “an artistic masterpiece”. The successful international sales funded the opening in December 1927 of the “Schiaparelli for sport” salon at 4 rue de la Paix dedicated to leisure clothing

Schiap began working the element of surprise into her designs, which especially proved popular with New Yorkers. Despite the stock market crash of 1929, she could still sell her models to exclusive stores such as Saks Fifth Avenue in New York. In the early ’30s, tweed suits and skirt pants became the fashion house’s forte.

Her signature silhouette was as architectural as a skyscraper. The press defined her style as ‘hard chic’. Without losing a sense of femininity, the high and narrow waistline, Schiaparelli’s silhouette incorporated padding, quilting, embroidery, decorated boleros, and turbans — all elements that metaphorically protect the female body from assault.

But Schiaparelli’s best ideas came out of collaborations with incredible artists. She and Man Ray inspired each other. She became his model, as seen through the many portraits he took of her —over 20 — and all his pictures of her collections published in Harper’s Bazaar. Man Ray’s photographs of butterflies inspired her summer 1937 collection. The surrealists and Schiaparelli were fascinated with butterflies and considered their wondrous transformation from caterpillar to butterfly as being one of the most exquisite in the natural world.

Schiaparelli also was a leader in fine fragrances. In 1934 she launched three perfumes — Soucis, Salut, and Schiap — and in 1937, she conceived Shocking! in a bottle in the shape of Mae West’s famously curvy silhouette. The surrealist artist Leonor Fini designed the iconic pink packaging that became a worldwide success. The famous shocking pink colour, fuchsia pink, was born. “I gave to pink the nerve of the red, a neon pink, an unreal pink,” she wrote in her memoir, Shocking Life, whose cover was also fuchsia pink. “It became the trademark colour of the couturiere,” says Marie-Sophie Carron de la Carrie’re, a senior curator at the Musée des Arts Décoratifs.

In 1947, her friend Dalì designed the packaging for a new fragrance, the Le Roi Soleil perfume, to celebrate the end of World War II. But the times had changed. In 1954, after presenting her last collection, she felt her career was over. The salon closed its doors the same year. Then she began to dedicate her time to assuring her place for posterity in museums. In 1964 she gave some designs to the Victoria and Albert Museum in London, then to the Philadelphia Museum of Art in 1969; and lastly, in 1971, to the Union Française des Arts du Costume in Paris, whose collection is overseen by the Musée des Arts Décoratifs.

Loathed by Coco Chanel, “that Italian who makes clothes” became a French citizen in 1927 yet never lost her strong Italian accent. As a retiree, she spent most of her time in Hammamet, Tunisia, where she had built a colorful home. But once more, Schiap returned to Paris, this time to die in 1973 at age 83.

After a long hiatus, the legendary Maison Schiaparelli reappeared on the catwalks in 2013, thanks to the Italian fashion mogul Diego Della Valle who rebuilt the brand.

However, it seems negotiations between Ford and Pinault broke down. Years later Ford spoke about his exit to a leading fashion publication stating the reason he left was “control”. For two years...

. In March this year, Nappa Dori opened up a shop in a prime location at Alserkal, Dubai’s dynamic art district. The lifestyle brand was born 11 years ago in a scooter...

Why easy is the buzzword in men’s fashion

. Clothes are a way of expressing one’s true self, as not only the young but even older generations are finding their unique style that speaks to them and shows the world...

Ahead of the festive occasion of Diwali — a much-revered Indian celebration and a spiritual ode to good over evil — we spoke to Khosla on everything spanning from why she resonates...