Which Abu Dhabi restaurants could be getting a Michelin Star?

Stars in the making…

Last week’s announcement that the Michelin Guide will be coming to Abu Dhabi for the very first time in November of this year has got us very curious about which restaurants could end up with a coveted Michelin Star (or two, or possibly even three). This is all still to be decided of course, but it doesn’t stop us wildly speculating on which capital culinary stops could soon be bathing in a stellar glow.

Dubai’s recent reveal, we think it’s fair to say, produced some surprising and exciting results — so there is a justifiable air of anticipatory excitement in the air right now.

And if not stars, there’s still the coveted guide to be included in, as well as the Bib Gourmand awards to be dished out. Only one thing is for certain, and that is — the promise of Michelin immortalisation will ensure everyone in Abu Dhabi’s restaurant industry will be putting everything into showing just how bright they shine. These are our best tried and tested guesses at who could be in for a shot at guide recognition glory. 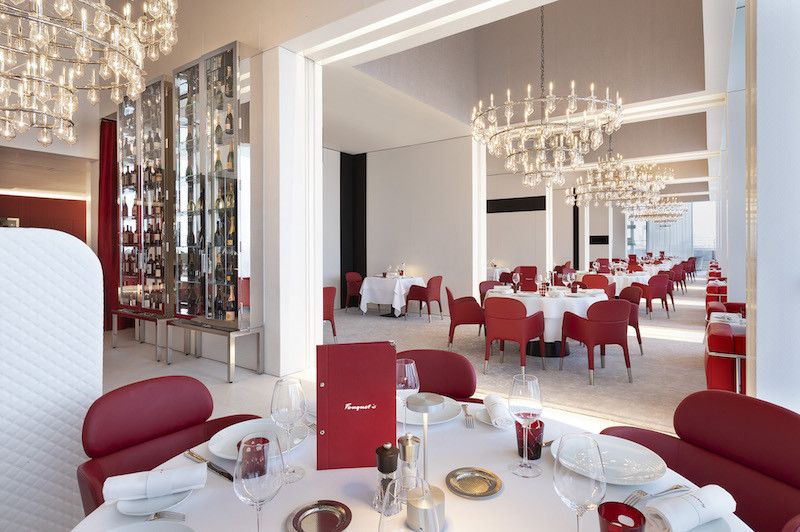 This Parisian import sits under the canopy of Louvre Abu Dhabi and comes from some pedigree stock. The menu was designed in collaboration with Pierre Gagnaire, the same Michelin Star-earning chef responsible for the food at the Champs-Elysées based Fouquet’s. It’s fluent in French fine-dining, with an occasionally noticeable Middle Eastern edge to its accent. When we dined there, we fell in Louvre with the braised lamb shoulder, served with green lentil hummus flavored with curry paste — describing it as a “taste expedition that begins with a stroll down Avenue Victor Hugo but crosses purposefully into the souks of old Abu Dhabi”. @fouquetsabudhabi 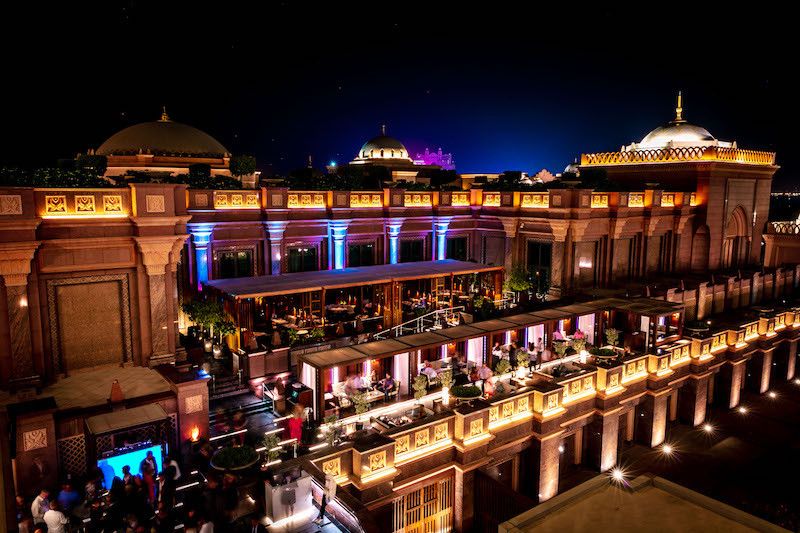 Another name with links to the Michelin constellation, Hakkasan is a global chain of high-end Cantonese restaurants, and this Abu Dhabi outpost has a very special location. You’ll find it at Emirates Palace, plating up artful servings of dim sum, seafood, spice and other food fire, often based on ancient Chinese recipes. Two London Hakkasans have won Michelin Stars, and Dubai’s own location gained one in the inaugural guide this year. Our picks from the Abu Dhabi menu? Typhoon lobster, Chilean sea bass with organic honey and the supreme dim sum selection. Our verdict after eating there? “The aesthetic element of the courses at Hakkasan is important, yes, but the art is indistinguishable from the eating. It’s all about the holistic experience. The chef is speaking through the food, and whilst we can try to describe it here, the only way to hear this beautiful mantra is to try it. Which you really rather ought to.” @hakkasanabudhabi 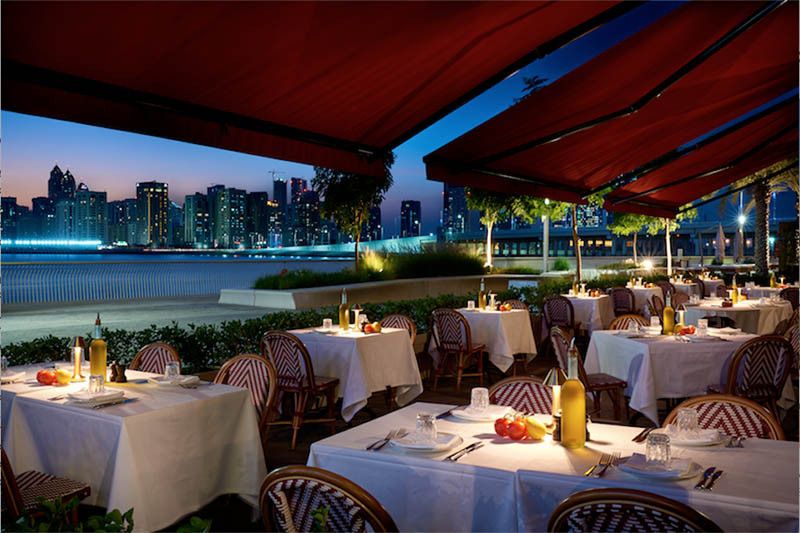 Al Maryah Island probably isn’t the first place you’d look to find a modern French bistro (pretty much any city or provincial town in mainland France would be a more logical choice), but rest assured you’d be well rewarded if you do. LPM offers a chic white tableclothed-promenade along the meridian lines of authentic European cuisine, with an unfussy menu full of faithfully recreated continental charm. We checked out the La Vie en Rosé brunch earlier this year and had this to say: “There’s none of the hurriedness of live cooking stations, there’s no elbow jousting at the buffet, these are essentially a la carte dishes expertly prepared in the kitchen and they, without question, belong in the upper troposphere of Abu Dhabi’s fine-dining world. Tender, expertly-sourced, cuts superbly finished with stubborn French attention to detail. You taste the char, the rendered juices, the simple, vital flavour of the meat.” @lpmabudhabi 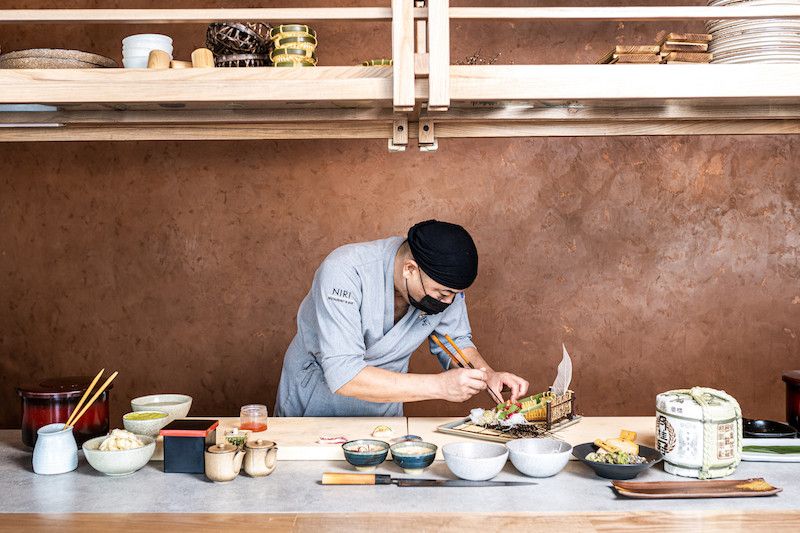 When we first visited Niri at Mamsha Al Saadiyat, it was a completely off-the-beach decision — no reservations, no bookings just hungry moths drawn in by the naturally light of the izakaya style interior and cherry petaled sakura. It feels unfair to draw comparisons between restaurants, they should be able to stand on their own two feet, but the human urge to categorise by similitude is electromagnetic in force. And this does feel so very much like a mini Zuma (with dishes available at a fraction of the cost). Stand out dishes for us, are the spinach nasu goma, and the miso suzuki. This was our overall feeling about the place after our first visit there: “Chewing on the last few moments of our time at Niri, we’re persuaded that this restaurant is an excellent addition to the Saadiyat dining scene. It makes a respectful bow to haute Japanese cuisine and steps well beyond the well-trodden paths of sushi and ramen restaurants in the capital. The fact that it’s licensed for adult drinks, offers another way to enjoy the venue, a choice spot for seaview sundowners alongside some next level nibbles.” @niriabudhabi 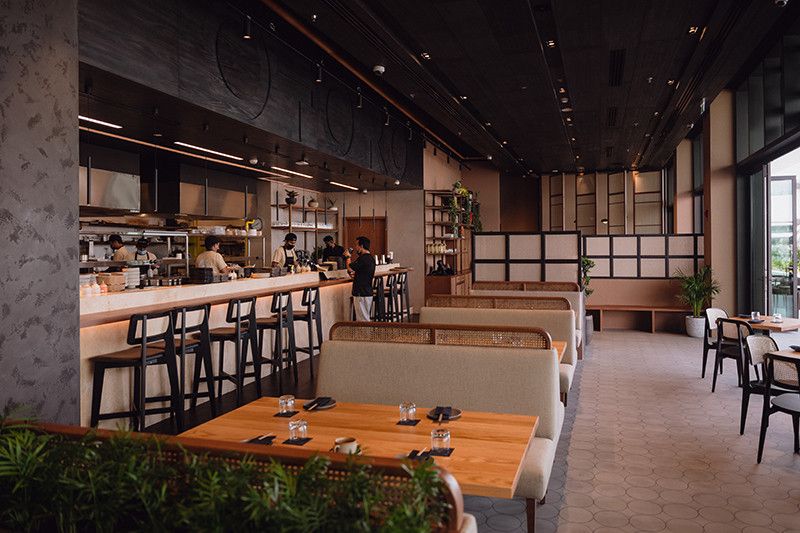 Locally based culinary legend, chef Akmal Anuar (whose Dubai restaurant 11 Woodfire won a Star in the inaugural Dubai Michelin Guide) opened his first Abu Dhabi restaurant this year, and it’s a keeper. The location pin drop is at the canal front destination Al Qana, the seat of so much exciting new gastronomic and leisure murmurings in the capital. Otoro is an authentic and clinically studied reenvisaging of an Osakan kitchen, and our pick of the dazzling dishes was the: “melt-in-the-mouth shabu shabu burger (Dhs110). A burger like no other, its moreish wagyu slices, perfectly toasted bun and buttery caramelized onion make every bite jucier than the last. We lick our fingers clean.”  @otoro.ad 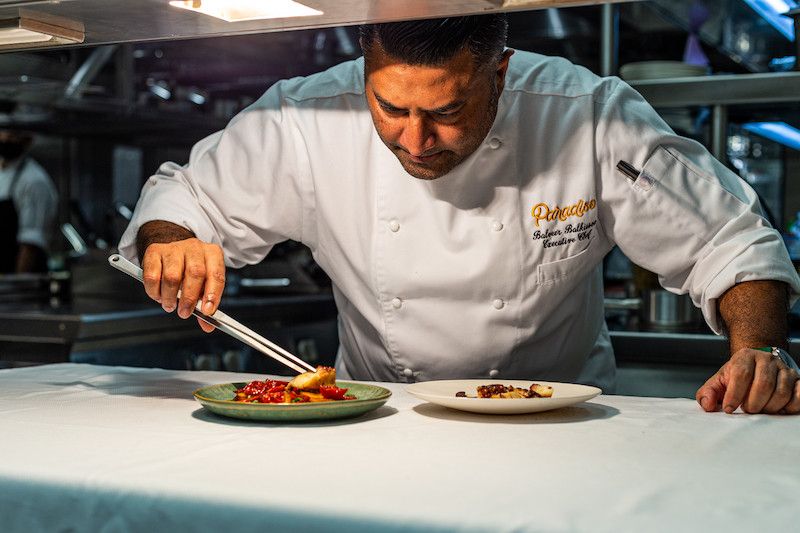 Another capital newcomer, Paradiso is the latest Abu Dhabi project from Groupe Barrière, a restaurant built on the culinary vision of three Michellin Star awarded talent, Chef Pierre Gagnaire (Fouquet’s) and French-cuisine queen Chef Nicole Rubi (the woman behind Nice’s La Petite Maison). The menu is a symphony of strong Mediterranean flavours, with core Gallic gastronomy such as escargots and sole meunière served alongside dishes with other EU passports — their pizza, for example, have already earned fame and acclaim from capital foodies. Our postcard from Paradiso simply read: “It’s a tough call but this might just be our new favourite restaurant at Yas Bay. It certainly stands shoulder to shoulder with Abu Dhabi’s other great examples of Mediterranean restaurant. Views to fall in love with, food for the ‘sole’. @paradisoabudhabi 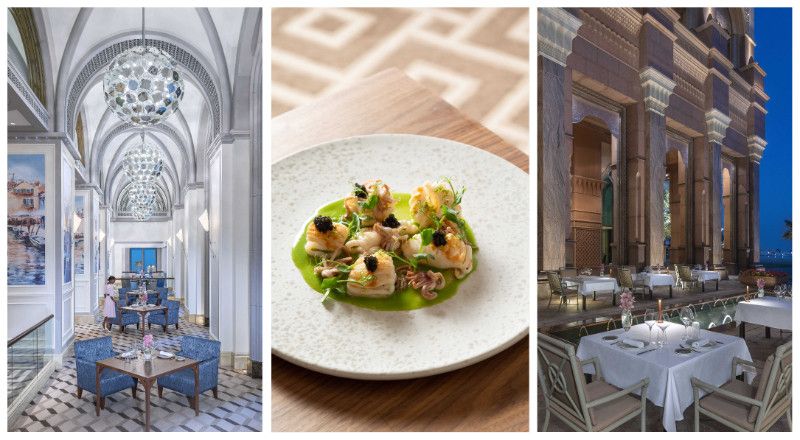 Confirmed: The Michelin Guide is coming to Abu Dhabi These are the new restaurants coming to Rixos Marina Abu Dhabi

Emirates Palace absolutely has the potential to find itself representing a binary star system, with the relatively recent launch of Talea. It’s a culinary engine driven by multiple Michelin Star-honoured Chef Antonio Guida. A modern space, there are faux frescos on the wall depicting scenes from various Italian cities and highlighted detailing on the ceiling coves. We swooned over the calamari alla griglia, and gushed in hushed cooing sounds over what they did to a fillet of ricciola (amberjack). Our verdict: “Talea is an Italian job extremely well done, blowing the doors of our expectations clean off. Best Italian fine dining in the city? It just might be.” @taleauae 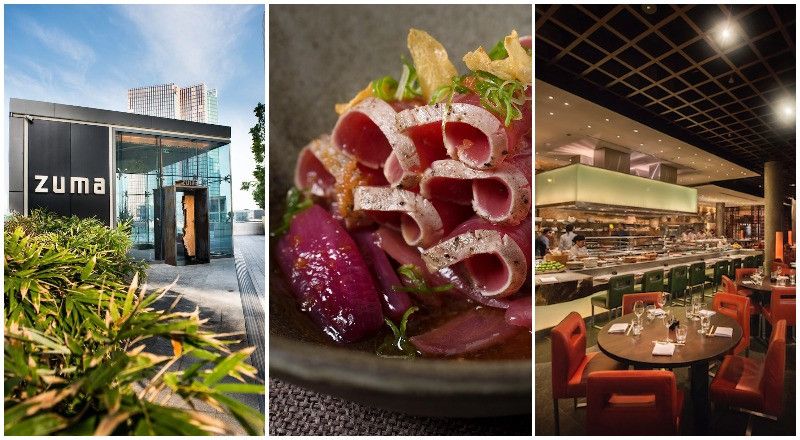 You know the name, you’ve heard the hype – but there’s a reason for both those things and they essentially amount to the same thing. Zuma is an exceptional restaurant chain, and this Abu Dhabi location is no weak link within it. Dining highlights come from dishes such as the fatty tuna nigiri (with the option of uni for the uber bougie brigade), wagyu beef tataki with shaved truffle and ponzu, miso marinated black cod and the theatrical wasabi harvesting ritual performed table side. We went home meditating on the following thought: “Zuma passes the hype-check with flying colours, and whilst it might not be within the average casual date night price range, there’s a very good reason it tops the list of picks for those special occasions.” @zumaabudhabi

Other excellent Abu Dhabi restaurants that we believe could be in with a shout for a Star, mentioned in the guide or Bib Gourmand gong include: Antonia, Oak Room, Coya, Maartaban, Ushna, Byblos Sur Mer, Mare Mare and Li Beirut.

But what do you think? Were we right on the money, or did we miss the glaringly obvious? Tell us in the comments.

From wine and cheese nights to buy one get one free deals…Date nights in Dubai can get a little pricey, especially if you’re the one footing the bill. You don’t have to...

Sponsored: A sound clash from the international and local undergrounds…Earlier this year W Abu Dhabi — Yas Island announced that it was launching a brand new carnival of cutting-edge music — HYPE...

The choices are endless…Say goodbye to those head-scratching moments when it comes to buying gifts, and opt for one of these brands that offer up personalized gifts in Dubai. There’s no limit...

Alfresco season is here…Love the cinema? Take a break from the usual and opt for a different experience at one of these outdoor cinemas in Dubai. With the winter season nearly upon...