Why the UAE is attracting more foreign students than ever before 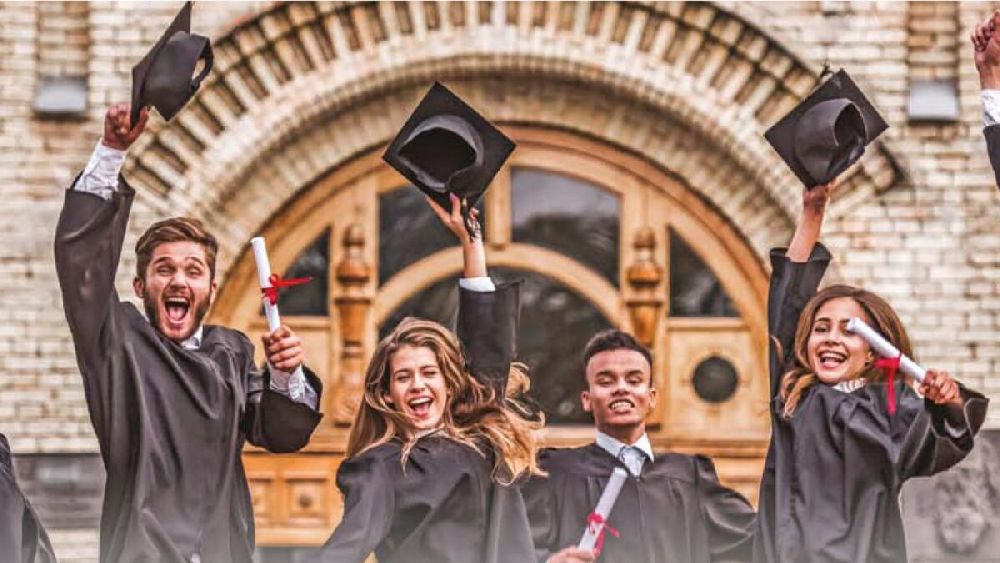 Mariska Labuschagne is a South African finance professional, whose 16-year career came to a crossroad in 2019.

She eventually decided to do something that most people with a successful 16-year track record won’t do — enrol into studies. She decided to pursue a Master of Business Administration (MBA) degree.

The most striking part of her decision was not the choice of MBA degree, but where she chose to pursue it: a relatively unknown institution called Eaton Business School in the UAE.

“Never in my wildest dreams would I have imagined what would happen next. Because of my MBA degree, I got three opportunities. I exchanged my office shoes for safety boots and a hard hat and joined the operations team; able to apply what I learned instantly to my everyday activities,” said Labuschagne.

“None of these opportunities would have crossed my path if it wasn’t for an institution like Eaton Business School. They guided me not only on that first step that I took but many steps thereafter.”

Labuschagne is one of the 130 students who recently received their MBA and Executive MBA degrees from Eaton Business School, a premium online educational institution affiliated to several British and European universities and accredited by Italy-based Guglielmo Marconi University (GMU).

The UAE, which used to be a net exporter of undergraduate students to universities in North America, Europe, and Australia, was not known for higher studies, let alone attracting international students — until a few years ago. It used to send approximately 15,000 students abroad per year, a number that has been increasing up to four per cent annually.

At the beginning of every fall and spring semesters, thousands of students used to fly out of the UAE to some of the best universities in the US, the UK, Canada, and Australia to pursue higher studies and their dreams, which they still do even now.

However, the country is attracting a larger number of foreign students to a growing number of educational institutions, thanks to the government’s initiatives.

At present, Dubai is home to 34 international higher education institutions that provide more than 600 programmes with one in four students, or 28 per cent, coming from outside the UAE. Dubai’s international higher education institutions reported an annual enrolment growth of 3.6 per cent, with more than 29,000 students enrolled in university programmes.

Dr. Abdulla Al Karam, director-general of the emirate’s Knowledge and Human Development Authority (KHDA), said: “Dubai continues to strengthen its position as a leading international study destination. The growth and diversity in programme choices offered by international universities in the emirate, and the sustained growth in international student enrolment highlights Dubai’s ability to consistently deliver high-quality education and builds on our commitment to create better education choices that offer families and investors new possibilities.”

In January 2021, the UAE Government said it would give longer-term residence visas to foreign students pursuing education in the country — a move that many considered a game-changer.

A few days later, His Highness Sheikh Mohammed bin Rashid Al Maktoum, Vice-President and Prime Minister of the UAE and Ruler of Dubai, said foreign students would be permitted to bring relatives with them to the country “whenever they have the financial means” to do so.

The UAE Cabinet directive encouraged more learners to make the country their chosen destination for undergraduate and postgraduate courses —and give them the incentive to lay down roots in the country long after they finish their academic journey.

Thanks to these initiatives, coupled with the presence of several renowned educational institutions here, the country has become a favourite destination among international students pursuing undergraduate and graduate studies.

The UAE is home to 60 globally respected international university campuses, which generate millions of dollars and help the country earn foreign currency. These institutions are changing the lives of people in different countries, especially from Asia, Africa, and the Middle East, who utilise educational degrees to upskill themselves for career growth and change, start a business, or migrate to new country.

Mohammad Abdullah, managing director of Dubai International Academic City (DIAC), said: “The key role of academic institutions in attracting and nurturing future generations of creators, entrepreneurs and specialists has laid the landscape for the country’s economic growth, innovation, and competitive industries. For nearly two decades, our academic ecosystem has contributed to advancing and promoting Dubai’s attractiveness to renowned universities and top-scoring students to consolidate the knowledge-based economy.”

The number of international degree-seeking students in the UAE reported a spike from 48,653 in 2011 to 77,463 in 2016, according to data from The United Nations Educational, Scientific and Cultural Organization (Unesco). Most of these students pursue distance learning through online courses.

E-learning in the UAE is growing at a compound annual growth rate (CAGR) of 10.3 per cent. The UAE online education and e-learning market is expected to experience high growth on the back of increasing government investment to digitalise the education sector and positive student attitude towards remote classes.

Promoting the digitisation of learning and training by providing electronic gadgets to the people is taking the Middle East a step ahead in the sector of online education.

The emergence of multiple sectors across the region has led to a big market for suppliers and has also opened the doors for new players in the booming e-learning sector.

Significantly, there is a big support from the government authorities in the education industry. The adoption of high-end technology is expected to expand the e-learning market in the Middle East, research says.

“Inbound student mobility to the UAE is enormous and growing at high velocity. As a small country, the UAE has lower total international student numbers than major international study destinations like the US, the UK, or Australia. But its inbound mobility ratio of 48.6 per cent is easily one of the highest in the world and dwarfs that of all major destinations,” according to Dr Ajay Shukla, co-founder and chief strategy officer, Higher Education UAE.

“India is by far the largest country of origin of foreign degree-seeking students in the UAE: The number of Indians enrolled in degree programs in the UAE has increased by 50 per cent since 2011. As per Unesco, Indians make up 17 per cent (13,370 students in 2016) of all international students. Other countries from the region, such as Syria, Jordan, Egypt, and Oman, send over 5,000 students, followed by Pakistan,” he said.

Dr Shukla stressed that politically, the UAE is “an oasis of peace” for students from regionally troubled countries, such as Iraq, Egypt, Syria.

“(These students) are facing challenges not only within their home countries but also at ‘Western’ higher education hubs where securing visas and cost of education are daunting. In this context, the UAE is positioned well to boost higher education enrolments from these markets due to more affordable study options, liberal student visa regime and a relatively thriving employability market coupled with liberal work visas,” he added.

The UAE, specifically Dubai, has emerged as a knowledge hub for the Gulf Cooperation Council (GCC) and the broader Middle East North Africa and South Asia (Menasa) region.

As one of the world’s leading global cities, it offers a top-class infrastructure and services to enable education and training institutions. There are 35 international or internationally accredited campuses located in Dubai with 37,602 enrollment and 78 have domestic licences and accredited by the Council of Academic Accreditation, Ministry of Education.

Firoz Thairinil, CEO of Westford Education Group, which operates four institutions including Eaton Business School, said: “We’ve successfully transformed the UAE as a regional education hub where international students now come to seek knowledge, upskill themselves to be able to take control of their future career path. The UAE imparts knowledge to more international students by attracting them, compared to the number of students who go abroad for higher studies.

“The UAE Government has been able to create a knowledge economy. We’re happy to play a role as an education group that has changed the lives of more than 15,000 international students who have joined our institutions.”

The UAE’s education market was valued at $5.2 billion (Dh19 billion) in 2019 and was estimated to grow by 8.3 per cent annually, according to a research report.

The online education segment was valued at Dh3 billion ($854 million) in 2019 and was initially estimated to reach Dh4.7 billion ($1.3 billion) by 2023 at a CAGR of 15.2 per cent. The segment was expected to showcase stronger growth, primarily due to the Covid-19 pandemic that impacted the movement of students in the country.

The e-learning market in GCC countries will grow at 11 per cent to $569.04 million (Dh2.09 billion) in 2025, according to Technavio, a global consultancy. More than 65 per cent of the Middle East’s private educational institutes will adopt more online education/e-learning services.

Professor Nic Beech, vice-chancellor of Middlesex University in London, said: “The UAE’s vision to become one of the best countries in the world is underpinned by world-renowned, talent-driven education. Indeed, our education services have never been more accessible to students from across the world. With the UAE relaxing its visa laws, more and more young people can move here to study, and continue to work remotely for companies back in their home countries at the same time.”