World No.1 Alcaraz already back in Spain for Davis Cup Finals 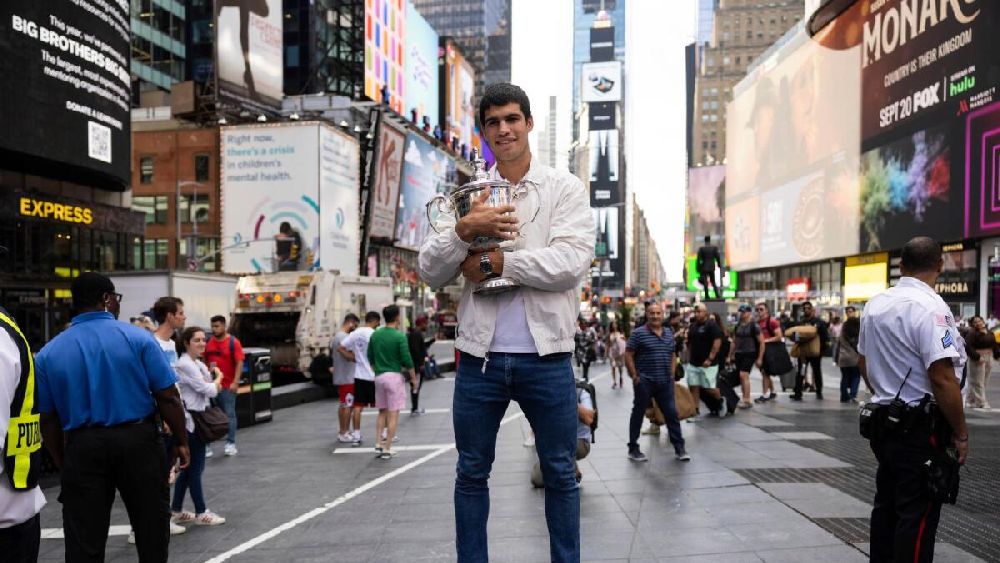 It was a quick turnaround for tennis’ new No. 1.

Hours after celebrating his first Grand Slam title at the US Open, Carlos Alcaraz arrived back home to try to help Spain in the Davis Cup Finals.

“I’m very proud to arrive as No.1 and do my bit for the team,” Alcaraz said on Tuesday. “Playing the Davis Cup is always special. It’s a unique atmosphere and I’m looking forward to being with the team.”

Alcaraz made it to Valencia the day before Spain were to debut against Serbia in the group stage on Wednesday.

It wasn’t yet clear in which condition Alcaraz arrived after having to play a gruelling series of matches on his way to the title in New York.

“Hopefully he can recover as soon as possible,” Spain captain Sergi Bruguera said. “We don’t know yet if he will be able to play on Wednesday.”

Many expected Alcaraz to skip the Davis Cup after defeating Casper Ruud in Sunday’s US Open final, which allowed him to become the youngest man to lead the ATP computerized rankings since they began in 1973.

The 19-year-old Alcaraz said following Monday’s traditional Times Squad photo shoot that he “woke up dead” after the four-set final against Ruud.

“We will see how he is feeling, we will discuss it with him,” Bruguera said. “The sooner he can play, the better.”

Before the final, Alcaraz had three consecutive five-set victories, including a five-hour, 15-minute quarterfinal match against Jannik Sinner.

“We all knew it was going to happen sooner or later,” Bruguera said. “But the way he won three matches in five sets is an incredible effort mentally as well as physically. Being the youngest No. 1 in the world, there aren’t any words.”

After facing Serbia, which is without Novak Djokovic, Spain takes on Canada on Friday and South Korea on Sunday in Group B. The top two teams in each of the four groups will advance to the quarterfinals, which will be played in November in the southern Spanish city of Malaga.

Alcaraz made it to Spain’s Davis Cup team for the first time last year, but had to withdraw from the tournament after testing positive for the coronavirus just before the competition was to start. — AP