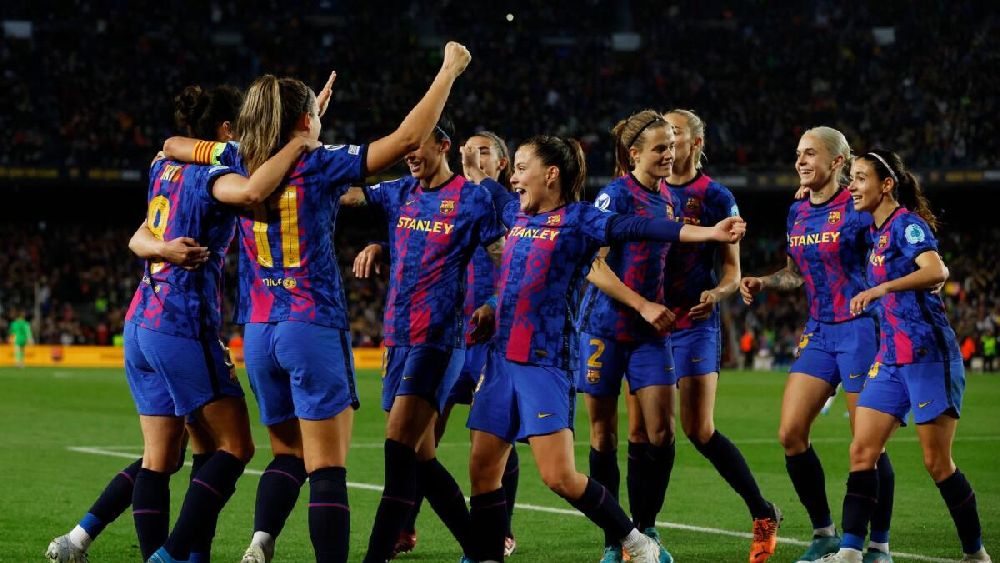 A world record crowd for a women’s football match of 91,553 saw Barcelona cruise into the Champions League semi-finals by thrashing Real Madrid 5-2 at Camp Nou on Wednesday to seal an 8-3 win on aggregate.

The crowd figure surpassed the previous record for a women’s match when 90,185 watched the 1999 World Cup final between the United States and China at the Rose Bowl in Pasadena.

It also smashed the previous record attendance for a women’s club fixture, set in March 2019 as 60,739 supporters saw Barca beat Atletico Madrid at the Wanda Metropolitano.

Barcelona were eager to give the fixture as much visibility as possible. The club’s 147,000 members were allowed 24 hours to book up to four free tickets, with only an administration charge due of 2.50 euros. Non-members were then able to buy tickets for between 9 to 15 euros.

The reigning European champions advance to the semi-finals where they will face the winners of Arsenal and Wolfsburg, who play their second leg on Thursday, after the opening game in London finished 1-1.

“It was magical – the game finished and nobody wanted to go home,” Putellas said. “We were celebrating with the fans, it’s amazing. There were so many people, so many girls. What happened today was historic.”

The night started with Barcelona’s team bus having to squeeze through thousands of fans singing and waving Blaugrana flags on its way to the stadium, while inside, a giant mosaic was soon formed, spelling out the words ‘more than empowerment’.

Real Madrid, meanwhile, were reduced to a cameo role, even if they had their moments across this tie and will feel encouraged after pushing Barca in spells. In both legs, Madrid started strongly only to wilt when their opponents cranked up the pressure.

Madrid were already facing a monumental task to get through after a late double had taken the tie away from them in the first leg, a 3-1 victory for Barcelona giving them a commanding lead to take back to Catalonia.

It started well for Barca when, in the eighth minute, Jenni Hermoso passed back for Mapi Leon out on the right and her in-swinging cross caught Misa out of position, the ball curling over the Madrid goalkeeper and in.

But Barca’s lead was short-lived as Olga Carmona’s driven shot caught the right elbow of Irene Paredes and Olga steered the penalty into the corner.

Madrid were gaining in confidence as the half wore on and shortly after the interval, they pulled ahead, Claudia Zornoza scoring a stunning goal from distance. With Madrid breaking through the middle on the break, Zornoza took over, spotted Sandra Panos off her line and lobbed the keeper from all of 40 yards.

Barca’s aggregate advantage was cut to one and nerves might have begun to take hold. Instead, they scored twice in three minutes to all-but end Madrid’s hopes.

First, Madrid were beaten to a loose ball in midfield and Hermoso played quickly to Aitana Bonmati, who was given too much room to nip inside and find the corner. Then, Fridolina Rolfo’s overhit pass was tidied up by Claudia Pina, who drifted forward and clipped a shot into the far corner.

With progress secured, Barcelona began to enjoy themselves and seven minutes later, Alexia Putellas made it four, her shot through the legs of Babett Peter squirming through the hands of Misa, who should have done better.

Caroline Hansen added a fifth at the back post after a surging run down the left by Rolfo. The biggest cheer of the night then came in injury-time, when the big screen showed the attendance.